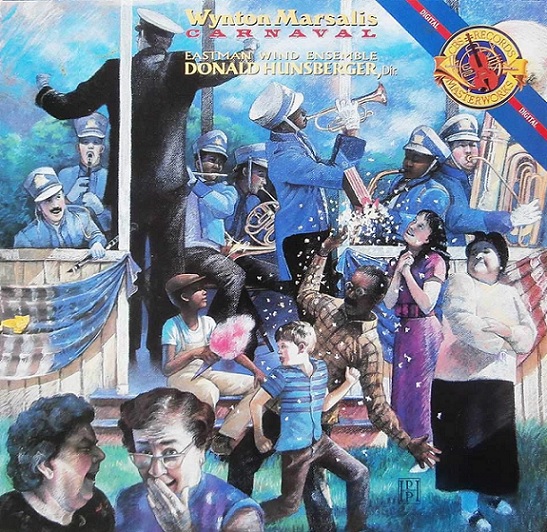 This was the LP recording that brought the 25 year old American trumpet prodigy right bang into the full centre stage spotlight glare of the wider brass playing world.

Recorded over three days at the Eastman School of Music in Rochester New York in September 1986, it was released in March the following year to widespread critical and popular acclaim - confirming the rumours that had long been heard from across the Atlantic Ocean (this was pre-internet days) that Marsalis was indeed the complete performance polymath.

There was no need for hype. His sheer swaggering, cherubic confidence was matched by a startling technique and effortless musical eloquence that made it all sound so easy.

Here was the chosen inheritor of the great American cornet playing tradition - the showy, brilliant bravura of Clarke, Levy, Emerson, Gilmore, Liberati, Beiderbecke and Arbuckle rolled into one.

Even the album cover with its hint of Edward Hopper 1950’s Americana (and French spelling), complete with conspiratorial middle aged women glancing back at you had charisma.

This was a performer making one heck of a statement mark.

However, despite the accolades (in 1982 winning Grammy Awards in jazz and classical music in the same year) he already had his critics: The pianist Keith Jarrett in comparing him to “a high school trumpet player”, said he imitated other people’s styles “too well”, whilst he already had encountered strained relationships with the likes of Miles Davis and Chet Baker, who once said; “If I could play like Wynton, I wouldn’t play like Wynton.”

It mattered little though.

However, if true greatness could be measured even at this tender age, it surely came with his rendition of ‘Sometimes I Feel like a Motherless Child’ , which sends a chill drip of emotional despair right into the chambers of your heart.

In the mid 1980s his star was in the ascendant – propelled by a series of jazz and classical recordings on the CBS label in particular that made a huge impact.

Today he is an American icon – respected and honoured throughout the world.  It is easy to forget that 35 years ago he was merely a phenomenon.

The performances are stunning - from the classic standards from Arban, Clarke, Bellstedt and Levy to the showcase lollipops of ‘Flight of the Bumble Bee’  and ‘Moto Perpetuo’  (although even that stands in the shadow of the double tongued version of Rafael Mendez (https://www.youtube.com/watch?v=i61dl_ex0xs) and the cultured appreciation of the traditional melodies of ‘Endearing Young Charms’ and ‘Tis the last Rose of Summer'.

However, if true greatness could be measured even at this tender age, it surely came with his rendition of ‘Sometimes I Feel like a Motherless Child’,  which sends a chill drip of emotional despair right into the chambers of your heart.

In a present age when far too many performers all too often fail to live up to their PR boosted media hyperbole, ‘Carnaval’ remains a benchmark of brilliance that brokers no argument.