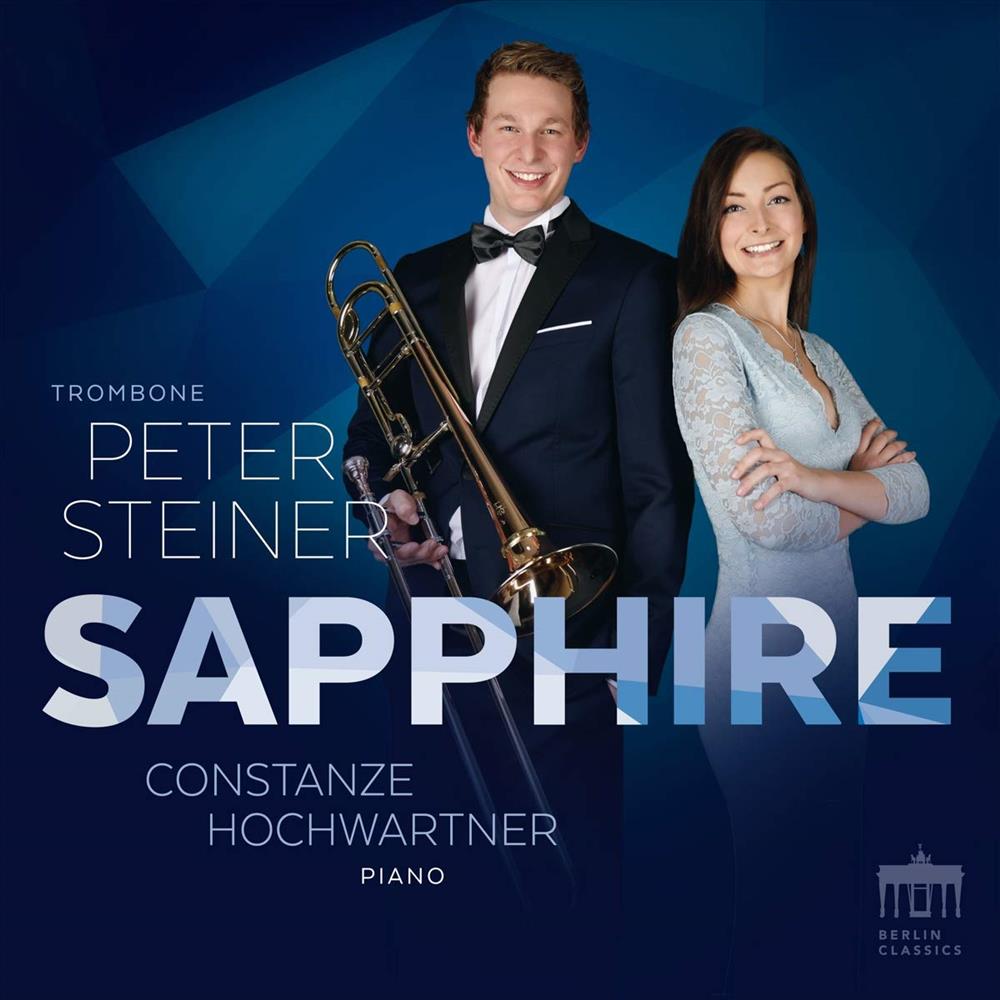 Italian trombonist Peter Steiner is rightly regarded as one of the finest performers of his generation.

His impeccable musical credentials have already been stamped by tenures at the Vienna State Opera (aged just 23), Vienna Philharmonic and Colorado Symphony Orchestra, alongside guest appearances with the New York and Munich Philharmonic, Seattle Symphony Orchestra and the Staatskapelle Dresden.  In 2019 he was a prize winner at the XVI International Tchaikovsky Competition.

His 2017 debut CD ‘United’ claimed widespread accolades, whilst this second, based on repertoire used on an extensive three month recital tour alongside accompanist Constance Hochwartner to the USA, Asia, Europe and South America, has already gained further critical acclaim.

‘Sapphire’ is a showcase amalgam of supreme virtuosity and musical substance; from the startling displays of technical showmanship on the schizoid ‘Rondo Alla Turca’ - played as if Mozart had been smoking something wicked in a Constantinople hookah pipe, to the glorious high tessitura liquidity of ‘Somewhere’  from ‘West Side Story’.

And that is just the opening brace of tracks.

Elsewhere he embraces a wide spectrum of diverse repertoire with an ease of controlled command that is never anything other than beautifully tempered; each performed with elegant understanding, enhanced by the symbiotic musical interplay with his pianist.

‘Sapphire’ is a showcase amalgam of supreme virtuosity and musical substance; from the startling displays of technical showmanship on the schizoid ‘Rondo Alla Turca’ - played as if Mozart had been smoking something wicked in a Constantinople hookah pipe, to the glorious high tessitura liquidity of ‘Somewhere’ from ‘West Side Story’.

There is a charming playfulness to Fritz Kreisler’s ‘Liebesfreud’  that contrasts with the impassioned operatic melancholy of Puccini’s famous ‘Che gelida manina’  aria from ‘La Boheme’ that's more than warm enough to save poor Mimi’s fingers from frostbite.

As for that matter are the red hot exhaust fumes of Dinicu’s famous ‘Hora Staccato’, although the poor seamstress would have to be wary of the deceptive beauty that flows so effortlessly in Nino Rota’s famous ‘Godfather’ theme.

Gilles Rocha’s ‘Fly or Die’  transcribes well for the lighter timbre of the tenor trombone; pulsating with a funky vibe that literally takes off in places, whilst Ricardo Molla’s ‘Fantasia Concertante’  is hewn out of a slab of musical granite then shaped with an instinctive understanding of the grain and texture into an imposing muscular construct - the technique breathless and brilliant.

Richard Peaslee’s ‘Arrows of Time’  is given a lucid, powerful interpretation – owing nods of cross-over stylistic appreciation to the likes of Joe Alessi and Frank Rosolino; the classical and jazz melding together in a rich alchemy of gold in each of the three movements.

It’s followed by Manuel de Falla’s ‘Nana’ - a tender lullaby of touching beauty to close - sad, longing and evocative, melting you away into heavy-eyed peacefulness.