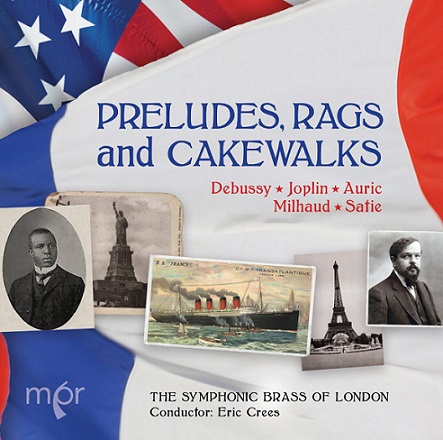 The French and Americans have enjoyed a rather complex form of musical ‘entente cordiale’  over the past century or more.

Cajun music with its deep emblematic Francophone roots has remained hugely popular, yet when Edith Piaf first arrived in New York she was initially rejected by audiences who didn’t understand her lyrics.

And despite the latter day Trumpian disdain for French imports Jane Birkin sold out Carnegie Hall in 2018 singing nearly all her show in a  peculiar form of lingua-franca.

On the other side of l’Ocean Atlantique the Parisian public adored the great Josephine Baker (and presented her with the Legion d’honneur), but by the mid 1980s the French Culture Minister was demanding that US pop videos only to be played with subtitles.

Yet a lasting mutual respect has been retained through a love of jazz and its precursor, the era of ragtime at the turn of the 20th century.

Debussy was certainly a fan, as was Ravel and Stravinsky, so by the time Scott Joplin’s music with its rhythmic subdivisions and inventive progressions found worldwide popularity after being brought to Paris in 1903, a trans-Atlantic cross fertilisation of styles from the likes of Satie, Milhaud and Auric began to emerge and has been maintained ever since.

From the high kicking ‘cakewalks’ and stylised syncopations of the vigorous two step ‘rags’, to the fluid movements of gentle swing, it is sophisticated music distilled into an intoxicating shot glass mix of bourbon and absinthe.

It is a fascinating tale told with academic rigour and performed with informed musical insight by the Symphonic Brass of London ensemble under the direction of Eric Crees, whose research underpins the project and the 21 splendidly arranged tracks.

From the high kicking ‘cakewalks’ and stylised syncopations of the vigorous two step ‘rags’, to the fluid movements of gentle swing, it is sophisticated music distilled into an intoxicating shot glass mix of bourbon and absinthe.

It is both eccentric and exquisite in turn - the inner workings of ragtime chromaticism and virile harmonies paced, as Joplin insisted it must be, to perfection – and “never fast at anytime”.

Joplin though is a genius – his works miniature masterpieces of form and function; the complexities made to sound almost naive in their simplicity.  They are anything but - from the opening ‘Swipesy - Cake Walk’  to the glorious ‘Stoptime Rag’  to close.

The men may never have met in their lifetimes (Joplin died in tragically reduced circumstances in New York in 1917, Debussy less than a year later, but already celebrated, in Paris), but all seem to pay direct and personal homage in their writing to a man who defined the musical style of a generation.

Eric Crees also pays his affectionate respects in performances subtly styled, coloured and paced – from the touchingly restrained to the joyfully raucous.  Musical authenticity permeates through, understated yet valued in placement and precision.

It is a fabulous exploration that deserves the richest of accolades on both sides of the Atlantic Ocean.