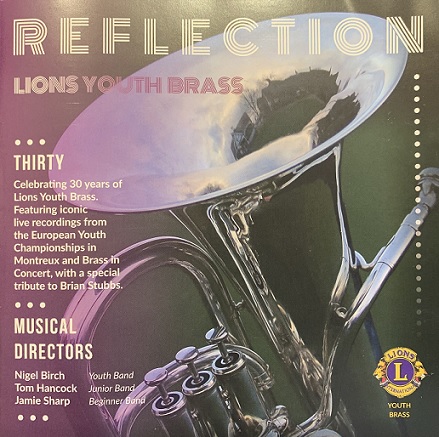 The Lions International organisation is a global network of volunteers working together to make a difference.

Positive social impacts are made on communities by leading by example – and for 30 years none has done it better in the South Cheshire and North Staffordshire area than Lions Youth Brass.

Recorded just before the COVID-19 lockdown this celebratory CD features 18 tracks from the current youth band, which has represented England with distinction at the European and Brass in Concert Youth Championships, as well as its excellent Beginner and Junior Band ensembles.

In addition there is a neat link to former generations with a trio of tracks from its Reunion Band.

For the past 25 years and more the musical direction has been held in the safe hands of MD, Nigel Birch; an indefatigable figure who has inspired countless youngsters in their enjoyment of brass banding.

Meet him and you understand why: His is a vocation – one that looks to the long term development of his players as both musicians and young adults.

As a result, success is enjoyed, but it is the sense of communal achievement (and loss in the tribute to the much loved volunteer, Brian Stubbs) that means more - the remarkable efforts the organisation made to raise funds to perform at the 2019 European Championships was a case in point.

The current Youth Band is an impressive outfit, with Nigel leading a well balanced ensemble which plays with a great deal of style and rigour both on the contest stages at Gateshead and Montreux and the recording studio.

There are sure to be many more trips abroad in the future – one that is being moulded for the next generations to enjoy by two excellent musicians in Tom Hancock and Jamie Sharp.

They lead the Junior and Beginner ensembles in their neatly crafted contributions, whilst the playing of the Reunion Band clearly shows that there is a lasting legacy too with their trio of accomplished items.

The current Youth Band is an impressive outfit, with Nigel leading a well balanced ensemble which plays with a great deal of style and rigour both on the contest stages at Gateshead and Montreux and the recording studio.

The featured soloists all deliver their items with showy, mature aplomb and there is a nerveless quality about those contest performances – played with confidence and energy.  Daniel Hall’s drama packed European Championship test-piece, ‘Sanctuary’ is brought to life in best Victor Hugo fashion.

If brass banding in the UK is to prosper in the post COVID-19 future then we need more organisations like Lions Youth Band.

They are a band that makes a hugely positive difference in all that they do.