CD review: The Romantic Cornet — Music for Cornet and Piano 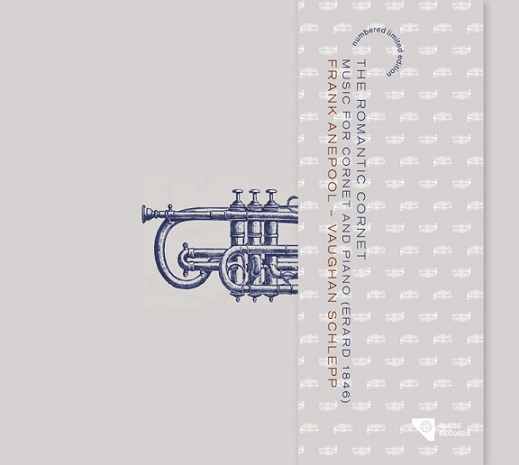 Although recorded over two years ago, this recently released recital collection of works from arguably the peak years of the cornet’s romantically inspired repertoire, provides a timely and refreshing appreciation of the art of ‘heritage’ performance.

Frank Anepool has an obvious respect and informed understanding for the music and the style in which it should be interpreted - freeing it of cloying sentimentality so that melodic technicality is brought to the fore without needless facile showmanship.

The academic understanding is also enhanced by the decision to perform on a 1970’s medium bore Sovereign 920 cornet with a deep cup 1880’s Guilbaut Couesnon mouthpiece – a combination that provides modern day intonation security yet retains a light, breathy tonality that harks authentically back to the era.

Anepool’s impressive CV backs his performance credentials. He is a soloist of the highest grade; able to display both a tallow translucence as well as bel canto meatiness to his sound.

The limited edition release is also aided by the accomplished piano playing of Vaughan Schlepp on an 1846 Sebastien Erad instrument, although it is frustrating that the accompanying booklet has very little context information about the works themselves (the white print text on the cover is almost unreadable).

Anepool’s impressive CV backs his performance credentials. He is a soloist of the highest grade; able to display both a tallow translucence as well as bel canto meatiness to his sound.

The musical intelligence seeps through each track – from the exhibitionism of Bellstadt’s ‘Napoli’  and ‘Carmen Fantasie’  (written in the same year as the opera was premiered in 1872), to the neat contrasts of the academic explorations of Brandt’s brace of 'Konzertstuck'  works.

Elsewhere, Oskar Bohme’s impassioned ‘Liebeslied’  and joyful ‘Russischer Tanz’  (a real musical curiosity given the composer’s tragic demise in 1938 following his exile to the Ural city of Orenburg by Stalinist authorities) is balanced by the delightful ‘A Chloris’.

Rightly considered to be the very apex of Reynaldo Hahn’s art as a vocal pasticheur with its elegant ‘Bach’ momentum provided by both the piano accompaniment and the graceful solo line, it is quite beautifully played - as is each work on a highly recommended release.