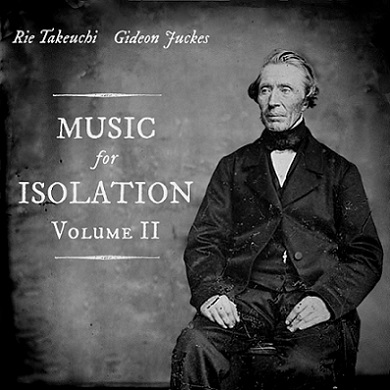 The second in the isolation series from the musically intrepid Tokyo based duo of baritone saxophonist Rie Takeuchi and tuba player Gideon Juckes once again sets the listener adrift in a perpetual sea of embracing loneliness.

As with the first volume it is a thoroughly absorbing experience - music to watch the heavens go by; gently resolute in its dark tonality even as it releases you ever further from a tethered sense of time and place.

The tracks echo with haunting thoughts of loss and faded memories; a sadness wistfully permeating the flow of your journey. The atmosphere clings like cold sweat to your skin.

Nine short pieces broach inspirations from the Egyptian astronomer Ptolemy and Icelandic poet Rosa Gudmundsdottir to Bela Bartok and the 19th century Welsh hymn writer William Owen – all in their darker moments it must be said.

The atmosphere clings like cold sweat to your skin.

Jucke’s own ‘Above the Midnight Sky’  floats in the air before ‘Vísur Vatnsenda-Rosu’ calmly lowers the pulse rate further.  They sit in deferential respect next to ‘My Bonny Boy’, which brings an icy shiver of loss as if reading the weathered inscription on the gravestone of a long dead child.

Even the dancing delicacy of Willaert’s ‘Vecchie Letrose’  retains the sniff of its acidic prose – a 16th century Venetian piece of ‘hate mail’ to a group of old ladies from Naples, whilst ‘Les Ecureuils’  adds a flippantly tart bon-mot just to back it up.

Elsewhere, Aaron Copland’s ’Red Sky at Night’  is as gothic as Grant Wood’s famous mid-west portrait of earnest duo endeavour, as is the inky textural pitch of the Bartok.

However, both are over-shadowed in condensed intensity by the superbly realised spectral cloak that covers ‘Nagasaki Bura Bura Bushi’  which is, like the rest of the album, intoxicatingly mixed by Gideon Juckes.

It leaves you like the unknown man on the cover of the album. What thoughts would have gone through his mind at a time like this...