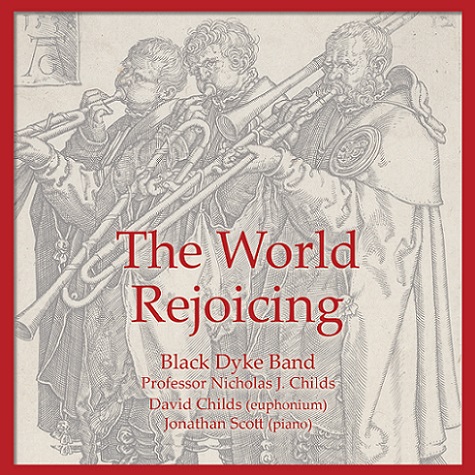 The seventh volume of this outstanding long term series (started in 1992) covers an arc of compositional output stretching from 1966 to 2022.

The 21-year-old third year undergraduate writing a ‘Concertante for Piano and Band’  was a very different composer to the one commissioned for a signature fanfare for students some 56 years later, yet the tensile thread of Edward Gregson's musical DNA has lost none of its unique strength of character with the passing of time.

Each of the featured works endorse that; the opening ‘Fanfare for a New Era’  a joyful peal of optimism to welcome Chetham’s School of Music students to lives of inspirational study.

It would be remarkable though if any go on to write something as mature in scope as his ’Concertante’, although it is also unmistakably underpinned by youthful purpose and positivity.

It would be a remarkable if any go on to write something as mature in scope as his ’Concertante’, although it is also unmistakably underpinned by youthful purpose and positivity.

Unashamedly romantic in outlook and gesture, it is infused by an osmotic appreciation of the likes of Rachmaninov, Gershwin and Ireland, yet, as Paul Hindmarsh says in his excellent sleeve notes, it also reveals the composer’s English sensibility and emerging helixes of self-identity.

The performance is of mature sensitivity and lucid thoughtfulness by Jonathan Scott (a Chetham’s alumnus); agile and commanding in changing mood and colour, texture and pace.

By ‘Laudate Dominum’  (1976), Gregson was a compositional ‘deus ex machina’ – the challenges of variation form mastered with an inventive command of structure that has rarely been bettered in the brass band world (‘Connotations’ followed a year later).

The work is as fresh today it was then; the composer adding two further variations in 2007 as a personal tribute to Black Dyke.  This recording comes from that time (taken from ‘Essential Dyke Vol III’) - finely interpreted by the MD, but as a result a little out of synch with the rest of the release.

Commissioned by David Childs, the composer was given free rein to exploit his almost limitless skill set. The result is artistry that is never subservient to the startling technique. It is both commanding and mesmeric – the soloist a performer without equal.

Gregson’s concerto output leading to his epically proportioned 2018 ‘Euphonium Concerto’  has been covered on other recordings (there are 11 in total from violin to tuba) - yet none perhaps exploits the scope of the spotlight instrument in such a complete manner.

Commissioned by David Childs, the composer was given free rein to exploit his almost limitless skill set. The result is artistry that is never subservient to the startling technique. It is both commanding and mesmeric – the soloist a performer without equal.

The release closes with a work that like the opening fanfare is built on the strength of optimism. Gregson has a deeply thoughtful intellect – the wider world, its troubles and challenges fascinate him.

‘The World Rejoicing - Symphonic Variations on a Lutheran Chorale’,  is a personal address in that respect - holding even greater resonance due to the death of his much loved elder brother and the wider almost metaphorical context of Covid-19.

The variant form remains, yet it is subtly shifted in focus as thematic material is cast through a ‘Prelude’  followed by a ‘Capriccio’, ‘La Danza 1’, ‘Processional’, ‘La Danza 2’, ‘Arias & Duets’, ‘Fuga Burlesca’, ‘Chorale’  and ‘Postlude’  leading to a gloriously uplifting climax.

The performance (as is the case throughout) draws optimism and joyfulness from the heart as well as the mind.

1. Fanfare for a New Age

9. The World Rejoicing – Symphonic Variations on a Lutheran Chorale