A combination of Swiss engineering precision and allergy free plastic looks to make an impression on being the name on lips of a growing niche market. 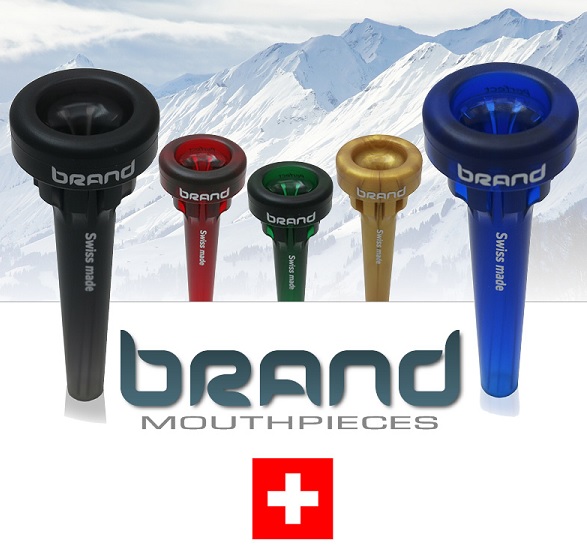 ‘Plastic’ mouthpieces have been around for quite a while now and have found a niche market for themselves based primarily on health and comfort grounds.

The all encompassing term can be a little misleading, as the actual materials used in manufacture vary - from polycarbonates and acrylic to acetal homopolymer.

However, in general, if you suffer with some form of allergy to metal or because you perform outdoors on regular occasions, they are ideal alternatives to traditional mouthpieces.

There are a number of established brands to choose from – all of whom have their own unique selling points, strengths and weaknesses.

The key though is to find one that can closely replicate the properties of your metal mouthpiece of choice, and which is also is comfortable, hard wearing and hygienic. 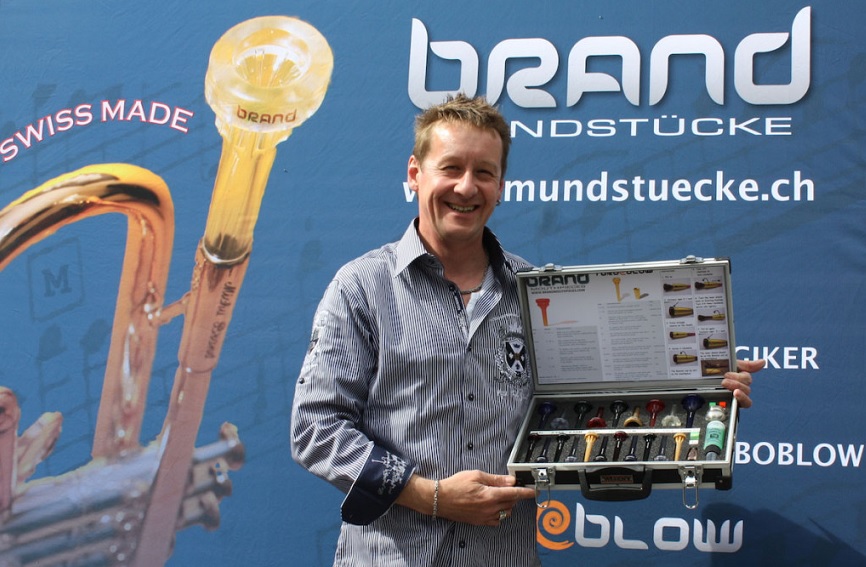 The latest to enter the competitive fray is Brand - invented by Michael Brand (above), who combines a highly successful professional career in the plastics industry in Switzerland with an enjoyable amateur one playing the trumpet.

After a considerable amount of research into selecting a cellulose based compound which was biologically inert, bisphenol free (BPA is found in epoxy resins that are used to coat the inside of types of metal and plastic products that store food and beverages) and Phthalate free (used to increase the flexibility of plastic), he used his engineering experience to incorporate the patented ‘TurboBore’ rifled design.

It’s the engineering that creates spiralling for a bullet as it is fired from the barrel, giving it greater accuracy and speed.

It’s the engineering that creates spiralling for a bullet as it is fired from the barrel, giving it greater accuracy and speed.

The thought process here is that the technology, which sees each mouthpiece engineered with a spiralled airway through the backbore, increases the focus and energy of the airflow, claiming the ability to gain a fuller sound with performance benefits in the higher register in particular along the way. 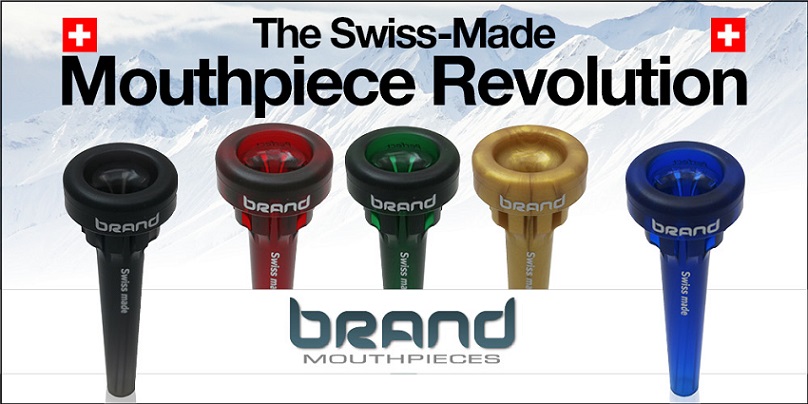 Because of the material used, plastic mouthpieces can feel ‘light’ – the lack of density creating problems with creating a good sound on the instruments.

Brand has helped overcome this by also producing a series of ‘boosters’ which have been designed to fit around the mouthpiece to increase the weight.

All this of course and Brand emphasise that by being plastic, the mouthpiece retains its inherent characteristics even when being played on outside in the heat or cold, and that you won’t be troubled by any allergic effects.

They state that it can be cleaned hygienically in hot water with a small mouthpiece brush and left to dry.

​Brand has helped overcome this by also producing a series of ‘boosters’ which have been designed to fit around the mouthpiece to increase the weight.

At the moment they are being sold through trade distributors Barnes & Mullins (UK and Ireland distribution) to retailers, with products available for trumpet (from the medium/deep cup 1 ½ C ‘all rounder’ to the bespoke ‘Trumpet Scream’  (very shallow cup) for all those fans of the stratospherics) and two models for cornet (the medium/deep 4B and deep 16E).

There are also two for flugel (both deep cup); five for trombone (medium to large) and two for tuba (shallow and deep cup). All will eventually come in a series of different colours for those who like that sort of thing. 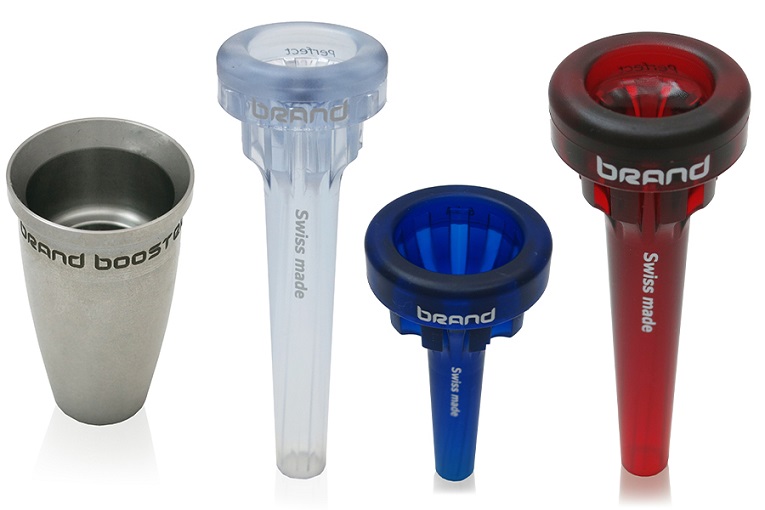 We managed to get our hands on a trumpet 7C and trombone 12C to try out, and you have to say we were impressed.

They are light in the hand, but robust and sturdy in precision design and feel (no rough edges and sharp clean lines).  The plastic itself is smooth and comfortable on the lips.

The logo ‘Swiss Made’ invariably stands for quality – and these were fully deserving of the stamp.

Performance is what you expect from a product with a bit of thought and know-how put into it (we used them without any booster).

The logo ‘Swiss Made’ invariably stands for quality – and these were fully deserving of the stamp.

The sound it helped produce (we used a Yamaha trumpet and a Rath tenor trombone) was full, flexible and bright.  And whilst it was hard to really suggest great enhancements in focus and flow, it was certainly well centred and freeblowing throughout the range.

Our test players did not suffer from any allergy issues. They had however played on plastic mouthpieces before and didn’t report any adverse effects after a week or so trying them out.

They also found them comfortable to play on outdoors (although to be fair it hasn’t exactly been Scott of the Antarctic weather of late). 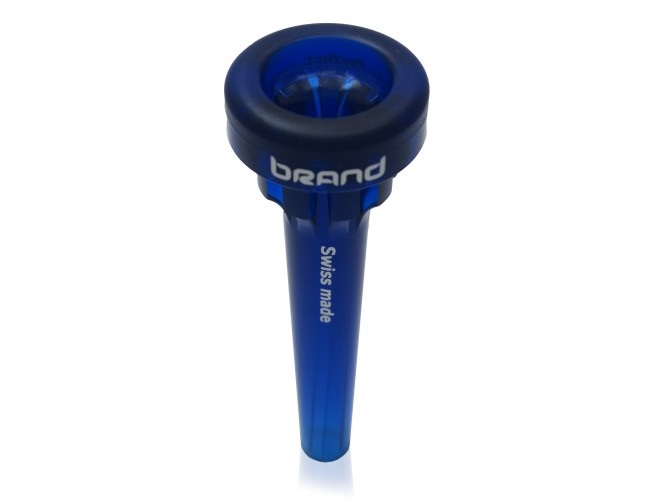 The mouthpiece comes in a sterile plastic container with a bit of foam padding (which look suspiciously like something you get handed at your Doctor’s surgery when you go in for your annual MOT) and a simple  instruction leaflet on how to use and look after your new purchase.

They are also competitively priced against market rivals (Kelly trumpet and cornet mouthpieces start coming in around the £40.00 mark, rising to around £60.00 mark for the tuba) – although there are some very cheap ones around that should be treated with a great degree of caution.

In time it would be good to see the range for cornet and trumpet extended to offer greater choice (the trombone mouthpiece can be used on the euphonium or baritone, but the same applies) but for the present the Brand plastic mouthpieces offer players something that is very well made and well thought out.