Eric Ball's iconic work is the test to overcome to make it to Cheltenham for 11 well matched bands. 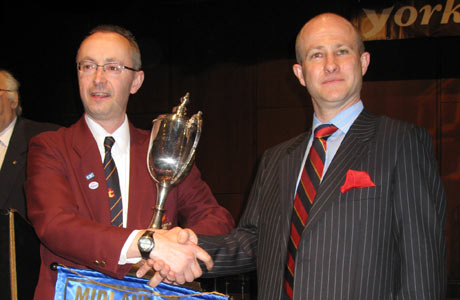 Eric Ball’s ‘Resurgam’ is proving to be one heck of a hurdle to overcome successfully for bands wishing to make it through to Cheltenham.

Already in Scotland, the North West and Yorkshire, some conductors have needed to call upon the services of Doris Stokes to be able to get in touch with the spiritual essence of his masterful work.

It has made for very difficult listening at times.

The Midland region hasn’t really produced any performances from their qualifiers of ethereal beauty come the finals of late either – a winner back in 2004 and solid performances resulting in 10 top six places since the turn of the Millennium, but last year’s qualifiers came 8th & 14th.

Hopefully, someone will be inspired to make Paul Norley and David Horsfield’s job an easy one on Sunday, but you doubt it.

Through no fault of their own making the Second Section bands are being ill served by a work that deserves much greater respect.

Seven bands return this year and are joined by two relegated from the First Section and two promoted from the Third.

Bakewell Silver just missed out on a trip to Harrogate twelve months ago on what was their Second Section debuts, and will be looking to build on the good form shown in coming runner up at the recent Derby contest.

The experienced David Stowell takes over the reins at Bilton Silver as they seek to put behind them a disappointing 10th place and rid themselves of any potential relegation worries, whilst Blidworth Welfare will surely be one of the pre contest favourites given their recent form.

Runner up last year, they went on to post a 8th place finish at Harrogate and recently came 5th at Butlins.

Relegated Ibstock Brick Brass won this title back in 2000, but return this year after a decade long stay in the First Section.

Huw Thomas leads a band that recently came 13th at Butlins and is in need of a bit of a morale boost.

Leicestershire Co-op (Snibston) meanwhile will by full to the brim with confidence following their good early season form, which has seen them come 7th at Butlins and win the recent Derby contest.

They have now posted three consecutive top six finishes here, so may be looking to claim a first finals place since 2006.

Matlock has put in a series of solid performances over the last few years since winning the Third Section in 2008 and will look to push further up the results table after last year’s 8th place.

Meanwhile, Porthywaen Silver return to the Section following their Third Section victory last year and their trip to Harrogate where they came 9th.

Raunds Temperance fell through the relegation trap door last year after coming 16th on their First Section, so are looking to rebuild under the baton of the experienced Robin Norman.

Meanwhile, Shirebrook Miners Welfare has certainly shown it is moving in the right direction after claiming promotion on the back of their podium finish in the Third Section.

They posted a top 10 finish at Pontins and a 12th place finish at Butlins earlier in the season.

A small field of contenders by Midlands standards, but just as well matched and equally as hard to try and predict a winner.

Looking at the recent form book though we opt for Blidworth Welfare and Leicester Co-op to go on and book their Cheltenham places, with Bakewell, Ibstock, Towcester, Raunds and our dark horse Shirebrook Miners not far behind.