The Welsh used to love a good carnival — all flat back coal lorries and fancy dress contests every May Day Bank Holiday. The Berlioz should be no problem then... 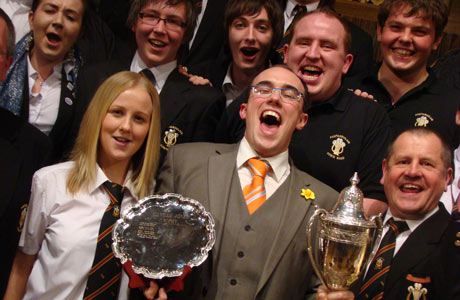 Due to the very Welsh way of dealing with such things, there is an increase in the numbers taking to the stage for the First Section on Saturday – up three from last year.

What they will make of Berlioz’s take on the valley’s equivalent of a May Day carnival (all beer and coal queens on flat backed lorries) is anyone’s guess, but if the pattern of the rest of the country is repeated on 'Le Carnival Romain', there could be a few stragglers left in old Hector’s wake.

Wales does have a good record of late at the Finals themselves – with wins registered in 2008 and 2009 as well as five other podium finishes since the turn of the Millennium.

Those champions (Beaumaris and Tongwynlais) have also gone on to make a real impression in the top section, so there are high hopes for this year’s representatives doing well in Cheltenham.

Last year’s qualifiers Wrexham and Pontardulais returned home from Harrogate in 3rd and 16th places, and are back again to see if they can claim the chance to improve on that come September.

Wrexham is in good form – claiming top six finishes at the Senior Trophy and Pontins, whilst last year’s Area winners Pontardulais came joint runner up in the Championship Section of the Welsh League behind BTM, although they were a little scrappy in coming 8th at the recent Welsh Open in Porthcawl.

The two relegated bands from the Championship Section will be keen to show their quality, with Burry Port starting to show the fruits of their rebuilding process at the recent Welsh Open where they came 7th.

Penclawdd also showed that they should be confident at this level after winning the end of season Welsh League contest at Blaenavon.

A confident Abergavenny showed that they could well claim a first finals place since 2003 after a hard working outing at Porthcawl where they came 10th, whilst Rogerstone will be looking for their first finals appearance since 2000 as they look to build on the encouraging form of 2010 when they were crowned First Section Welsh League title.

A strong contender will be found in 2009 Second Section National champion City of Cardiff (Melingriffith).

They impressed on their appearance last year and went on to win the Second Section Welsh League title and start 2011 with an excellent 5th place at the Welsh Open.

The current Second Section National Champion Tylorstown make the step up after their historic Harrogate win, boosted by a joint runner up placing in the top section of the Welsh League and a podium finish at Blaenavon, although they were a little hit and miss (although very entertaining) at the Welsh Open where they came 9th.

The North Wales challenge comes from promoted Deiniolen who were a little unlucky not to have ended higher than joint 16th at Harrogate under the baton of tuba star Gavin Saynor, whilst it good to see one of the most famous names in Welsh banding return once more in Parc & Dare.

They won this title in 2004 and 2005, and this time appears under the baton of Martyn Ford.

A bit of a difficult one, with a pretty well matched field of rivals.

City of Cardiff will have been boosted by their last competitive outing and could claim another trip to the finals as a result, whilst Wrexham Brass has been building impressively in the past year under Wayne Ruston. We opt for a North Wales win – but it could be close.

Behind these two it should be a close old battle between Tylorstown, Burry Port, Penclawdd and Pontardulais, with Parc & Dare our dark horse.

Welsh Bands at the Finals: