4BR looks back at Manger's Montreux victory and wonders if we should have all taken note of David King all along... 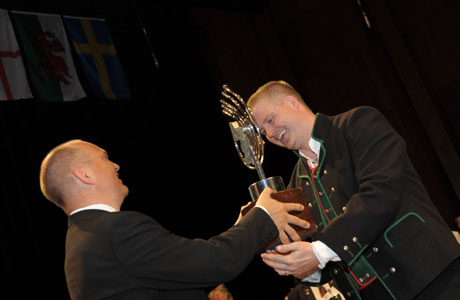 The moment of truth for Manger as they become European champions...

Trust David King to get it right.

The man who has more European Championship victories to his name than anyone else, identified the title winning potential of Manger Musikklag at the conclusion of the Norwegian National Championships in Bergen in February.

’If the bands at the European think they are in for an easy ride, then they are in for a big surprise with Manger’ he expertly predicted, when asked about his old band’s chances of success.

And as is just about always the case with the Australian when it comes to getting things right at contests – he was bang on the mark.

The 34th European Championships took a thrilling step into the musical future in Montreux – spearheaded by the newly crowned Norwegian champions.

Despite Cory’s immense title defence under Dr Robert Childs and Tredegar’s inspired performances directed by Ian Porthouse, this was a brass band contest won by persuasive, intuitive musicality rather than sheer technical brilliance.

At the very epicentre of Manger’s achievement was the remarkable Peter Sebastian Szilvay – a conductor of musical gifts and charisma possessed by very few in the banding world – not even David King. 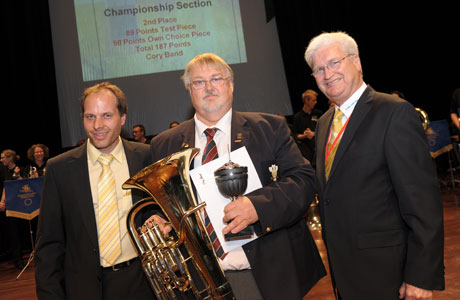 Disappointment for Cory in second place

Over two days of intense high class music making, the man who served his apprenticeship under the wing of the great Mariss Janson, and who has directed orchestras of the quality of the St Petersburg Philharmonic and Norwegian Opera was a class apart, drawing twin performances of immense flexibility and style from his band.

The Welsh heavyweights (and heavyweights they were – packed close to the numerical limit of 35 players) gave it their all, with renditions of the breathless set work, ‘Audivi, Media Nocte’ and their own choice showcases that would in just about any other contesting environment claimed victory with something to spare. 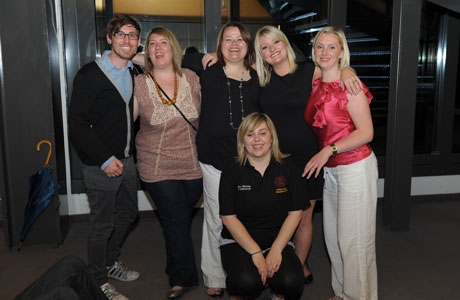 Two diverse juries were looking for something else; although the trio of Frode Amundsen, Eric Crees and Thomas Doss thought they found more of it with Manger compared to their Welsh rivals on Oliver Waespi’s set work than Blaise Heritier, Allan Withington and Luc Vertommen did on the own choice selections the following day.

Although Manger Musikklag didn’t secure victory on the Friday, they certainly welded at least one hand to the European Trophy with a performance of ‘Audivi Media Nocte’ that was rich in transparency, nuance, subtle shadings of timbre, dynamic and tempi.

It was the malleable nature of the interpretation that so stuck in the mind – an engrossing display of multi faceted playing, inspired by a reading of a complex score that never allowed the detailed technicalities to submerge the flowing musicality of the writing.

24 hours later, Szilvay inspired the same approach on Torstein Aagaard-Nilsen’s sensuous ‘Old Licks Bluesed Up’ – and another display of musical osmosis – a seeping, enticing musicality that permeated deep into the listeners brain.

There were the occasional nasty slips, but once again the construction of the musical architecture was subtlety moulded; smooth, sexy even, with wonderfully adept solo lines mixed with intoxicating ensemble layers of rich texture and balance. 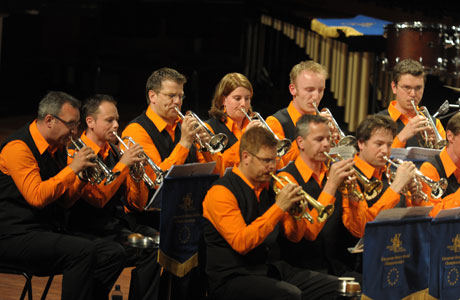 The new orange power of Schoonhoven in fourth

Late Saturday evening, after all the hubbub of the celebrations had calmed down 4BR spoke with a number of the judges.

Over the two days they spoke of rewarding musicality rather than mere technical edifice.

’It was a given’ they said, that the very best bands could play all the notes - it was the music making that was deciding factor.

It was an approach that broached little contrary argument.

Cory left Montreux disappointed, but with little to complain about.

The decision to boost their playing numbers certainly added extra power, but also meant that at times their approach lacked the flexibility of their Norwegian rivals.

It was juggernaut playing – unstoppable in its relentless brilliance on their own choice, 'From Ancient Times' (with Bert Van Thienen on sublime form on soprano) but in the minds eye of the judges on the set work, too overwhelmingly powerful to bring out the more subtle lyrical shadings and balances of Waespi inventive writing.

To see them take to the stage with five basses, five euphoniums and baritones and no less then 13 cornets in the ranks was a show of puzzling muscle flexing. 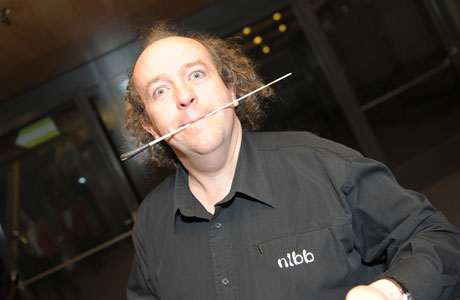 Tredegar too boosted their ranks, (six tubas and five euphs and baritones) and whilst it didn’t appear to be needed in the well-constructed rendition of the set work, the extra bodies were certainly called into action with their own choice selection of 'Destroy, Trample, as Swiftley as She'.

That performance hit the audience right between the eyes – and although it was not the type of piece to perhaps elicit an outpouring of fevered emotion, there was an unmistakable bubbling of appreciation that flowed over the hall at its conclusion.

It was also a performance that left no one in any doubt that on this form they are now one of the banding world’s best contesting ensembles.

Behind the top three came the vibrant musicality of the new banding powers of the Netherlands and Belgium: Brass Band Schoonhoven and Noord-Limburgse left an indelible impression on the mind over the two days in coming a well deserved fourth and fifth respectively.

Much of the credit goes to the excellence of their MDS – the elegant, precise Erik Janssen and the more compact, flamboyant, Ivan Meylemans.

Over two disciplines the desire to find the subtle nuances in their scores brought performances of lyrical warmth persuasive musicality.

Both were particularly impressive on the set work, with renditions that encompassed the oscillating elements of Waespi’s writing with distinctive, commanding understanding, to end the first leg of the contest holding podium place finishes.

There was much to admire about their approaches the following day, on ‘Montage’ and ‘Music of the Spheres’, although nasty errors and loss of ensemble focus in both just set them back a peg or two.

They are without doubt however two very fine bands that would quite comfortably secure a top ten place or better at the British Open. 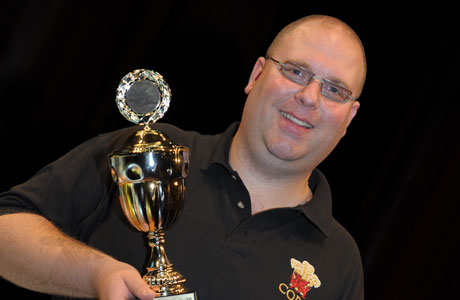 For Fairey (Geneva), with the great Alan Wycherley making his last ‘major’ contest appearance, a tale of what might have been.

A rather scruffy set work performance left them in sixth place on the opening day, but a stunning return to form on Simon Dobson’s ‘A Symphony of Colours’ seemed to have put them back in the mix.

Despite a wonderful bravura approach and a reaction from the audience that threatened to raise the hall off its foundations, it didn’t resonate so clearly in the box.

A little unfortunate perhaps, but they knew that they had left themselves far too much to do from the Friday to have pushed higher up the results table than sixth overall.

So too Treize Etoiles, who took the brave option under James Gourlay to choose Kenneth Downie’s ‘Concerto for Brass Band’ as their own choice selection – although it very nearly paid off, despite some uncomfortable tuning issues.

They needed to win on the day though to recapture the ground lost on a rather lightly timbred premiere rendition of the set work that under-whelmed the men in the box to such an extent that they ended Friday in ninth place.

They are a very fine, if rather puzzling ensemble to get a handle on. 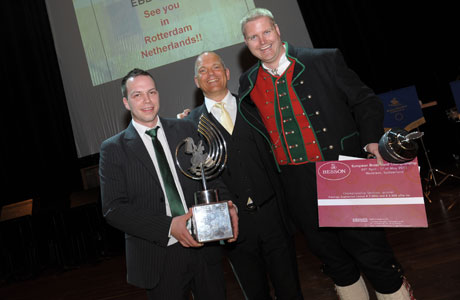 The final three bands were as clear-cut as those that claimed the podium places.

Windcorp delivered a well constructed set work on the Friday under Garry Cutt’s precise direction, but rather ran out of steam on ‘Rococo Variations’, whilst Lyngby Taarbaek delivered a compact test piece, but inherently less secure rendition of ‘A Tale As Yet Untold’, despite a promising opening section.

Kingdom Brass meanwhile will return to Scotland – as well as to Blackpool for the Grand Shield, a much better band for this experience, despite the end result.

A bold, bravura set work was balanced by a solid, if ultimately tired ‘Titan’s Progress’, which saw them give their all and more. In this company, they can be very proud of their efforts.

In the end though everyone should have all listened to the man who knows better than most what it takes to win this event.

David King certainly knows a European winner when he hears one.

Now we do too.