Cory set to revive memories of 60 years ago as they perform at the Southbank's celebration of the 1951 Festival of Britain. 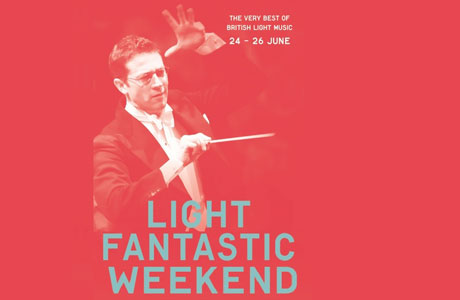 The Light Fantastic: The Southbank is to host the prestigious events

Later this month, the Cory Band is set to perform at one of London’s most important cultural events, and in doing so will rekindle musical memories of 60 years ago.

The series of high profile concerts aim to recall the sense of cultural optimism that permeated the country in the immediate post war period.

Then, despite stringent financial and social handicaps, the 1951 Festival of Britain, based in and around the south bank of the Thames with its strikingly designed Royal Festival Hall, provided a musical focal point for the nation.

Cory (or The Cory Workmen’s Silver Band as they were referred to by the promoters) was asked to take part in the musical celebrations in a huge concert that took place at The Royal Albert Hall under the baton of Sir Adrian Boult.

Its musical centrepiece was a performance of ‘The Rainbow’, a mammoth commission by composer Dr Thomas Wood arranged by Frank Wright for brass band accompaniment.

The work was based on the tale by Christopher Hassall, the noted English librettist who worked closely with Ivor Novello, of the infamous evacuation of the British Expeditionary Force from Dunkirk in 1940.

Not content with their part in the leviathan undertaking, Cory were so taken by the experience that they produced their own, slightly smaller versions of ‘The Rainbow’ six months later, conducted by Frank Wright in the Polikoff Factory in Treorchy and again at Swansea’s Brangwyn Hall under Harry Mortimer.

60 years later and the opportunity to revive those memories provided Cory’s MD, Dr Robert Childs (below right)  with a challenge – although he was thankful that he wasn’t asked to provide the personnel for a re-run of the original event.

”It’s a major honour for the band to be asked to perform a headline concert as part of the celebrations,” he said.

“The connection between then and now is amazing, especially as the original occasion is somewhat of a forgotten event in banding history.” 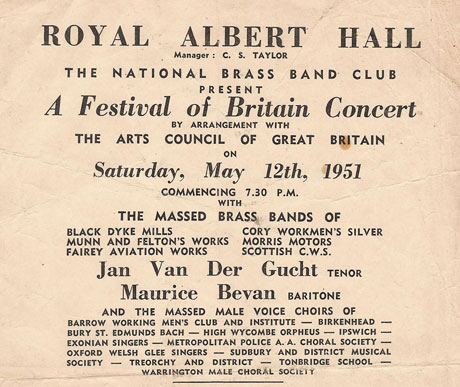 Rainbow original: The cover of the 1951 programme

It seems the score and band parts to ‘The Rainbow’ were lost when Cory’s old bandroom was destroyed by fire in 1990, but the MD was still able to unearth some information about those first historic concerts.

”I managed to find the original programme from 1951 and of the local performance in Treorchy in January 1952, and included details in my research for the Cory 125th anniversary book.

The 2011 celebrations will see major concerts hosted by the BBC Symphony Orchestra, BBC Concert Orchestra and the Central Band of the RAF, whilst the list of solo performers includes Lesley Garrett – all of who will be performing music from an era that after an extended period of unfashionable neglect is starting to enjoy a long overdue renaissance.

Ian Brownbill, who has a close working relationship with the prestigious London venue, helped to facilitate the involvement of the current World and Welsh Champion.

And the man who brought ‘King Cotton’ to the stage has no doubt that their inclusion in such an important concert series is a huge boost to the banding movement at a time when high profile cultural appearances for brass bands are few and far between.

” To get a brass band included in such an event as this is reason to celebrate,” he said.

“However, to get a band like Cory to be an integral part is something else. Their concert at the Queen Elizabeth Hall is one of the most significant concerts given by any band in the UK for a number of years.”

Influential support has been forthcoming however, as Ian explained: “The Southbank's Artistic Director, Jude Kelly OBE was determined that a brass band was included in the festival and their Head of Music, Marshall Marcus has also been hugely supportive."

Cory will be in elite company, with the BBC Symphony Orchestra under conductor John Wilson providing the first concert on June 24th, showcasing music from the likes of Noel Coward, Ivor Novello, Edward German and Arthur Sullivan, with the Central Band of the RAF providing works from Gilbert Vinter, Eric Coates and Ernest Tomlinson amongst others, a day later. 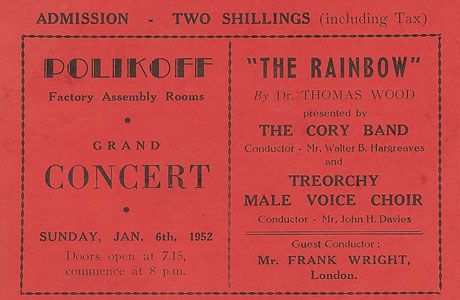 Polikoff version - hosted by Cory in Treorchy in 1952

The same night the BBC Concert Orchestra delivers repertoire from Robert Farnon, Sullivan, Coates, Tomlinson and Vivian Ellis, before Cory take to the stage of the Queen Elizabeth Hall on Sunday afternoon.

Bob Childs was asked to provide music that evoked the great tradition of brass band concert repertoire, from the height of its light music popularity in the late Victorian era right through to the modern day.

It was a request the MD was delighted to agree to.

”It was so refreshing to have the opportunity to showcase the full spectrum of brass band repertoire – and be encouraged to do so by the event organisers,” Bob said.

”We’ll open the first half with three modern classics from composers who have straddled both the brass band and orchestral divide with their ability to produce wonderfully accessible music.

”Robert Farnon’s ‘Fantasy for Brass Band’ is one of the most enjoyable test pieces ever written, whilst Dr Philip Wilby’s (right) magnificent ‘Paganini Variations’ is perhaps the ultimate showcase for a brass band.

“David Childs will also perform the Karl Jenkins ‘Euphonium Concerto’, which in a remarkably short space of time has become one of the undoubted classics of the genre.”

The second half will see Cory travel between eras with music from the Victorians of Arthur Sullivan and Henry Wood, inlcuding the archetypal theme and variation solo of the age, ‘Rule Britannia’, played by Owen Farr.

The Golden Age of brass band repertoire will be revived with two of the finest ‘gems’ in Ireland’s ‘Elegy’ from ‘A Downland Suite’ and Holst’s, ‘March’ from his ‘Moorside Suite’.

With further works from Eric Coates, Glen Miller, Gordon Langford and Edward Elgar, the MD believes Cory will be able to provide perfect examples of the brass band’s ability to perform ‘light’ music to quite ‘fantastic’ effect.

”We will feature all our great soloists such as Owen Farr and Tom Hutchinson,” he added,

For further information on Southbank Centre’s 60th anniversary celebrations of the 1951 Festival of Britain go to: www.southbankcentre.co.uk

Further information on Cory’s performance of ‘The Rainbow’ can be found by purchasing the 125th Anniversary Book:

Tickets can be purchased at:
http://ticketing.southbankcentre.co.uk/find/music/classical/tickets/cory-band-58616
Tickets: £15; £12; £8