This month we have been invited by Jeremy Wise for an evening's entertainment around the dinner table with his guests... 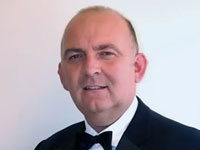 Forthright and passionate about his banding, he has developed a highly successful conducting career with periods at the helm of many of the leading brass bands in the UK - from Cory, Brighouse & Rastrick and Redbridge to his latest outing, leading Thundersley Brass at the National Finals at Cheltenham.

He is also developing into a well respected brass band journalist too, so we thought we had better find out who he would invite around his large dinner table for a feast and chin wag...

My father, and one of the greatest euphonium players I have ever heard; full blooded and passionate with an 'all or nothing' attitude.

The man who inspired me to give up trying to better him as a player and be a conductor.

My contesting companion for the last 40 years. He taught me what real commitment means and told me to 'always to do it well and properly or not at all'. A natural musician in every way.

A lifelong friend who is always trying to make me a nicer person. Consistently good humoured, great company and with a lot of good advice too.

One of the best brass teachers anywhere - just have a listen to Phil if you need proof.

A great cornet player himself too.

He has been an inspirational man to many and I am at the top of his list of admirers.

I have sat through many rehearsals where you cannot see what is happening but somehow the band sounds immeasurably better at the end.

Has a fantastic way with words and knows exactly what to do to get the best out of people without anyone realising how it is done.

Having sat through a rehearsal I was taking many years ago shortly before the National Finals when both I and the band were struggling with the piece I asked him what he thought - 'Necessity is the mother of invention' were his unforgettable words.

I had the honour of playing for Jim for 9 years at Enfield and hope that I absorbed a few percent of his knowledge in that time.

A peerless band trainer and a man who has been a model of consistency in every way.

He inspired such deference in me it has only been in recent years that I have been able to really talk to him - he chooses his words carefully and every one is worth the listen.

My grandfather - an 'old school' bander - he used to cycle to band practice with his Bb bass strapped on his back.

Played anything from baritone to Bb bass. Went to the Open and Nationals and sat through every band - I still have some of his programmes with his hand written notes alongside the bands name right back to the 1940's.

A natural story teller and genuinely funny man who never had a bad word to say about anyone. I wish I could spend some more time with him.

Frank has always helped me greatly as an aspiring conductor and I have learnt so much from him.

He was there in my very early days when in one particularly frantic bit of conducting I managed to put my baton through my eyelid.

He said nothing – just grabbed my arms and pulled them out in front of me and then said – 'conduct out here, not round the side of your head' – a very stylish conductor indeed and another brilliant story teller.

A friend since I was 16, former principal cornet of Hendon and a real larger than life character.

I love his attitude to life and I am always laughing when in his company. Contests would not be the same without his bear-hug greeting.

He, like me, is getting nostalgic in his middle age and the recalled tales get more and more exaggerated as the years pass.

My neighbour and best mate.

A really annoyingly talented tuba player who picks it up after a year  and sounds fantastic and the man who made me start running for which I will never forgive him.

I first met him busking outside Marks and Spencers at Christmas 1993 and signed him up on the spot for Hendon – he still says that I groomed him.

Principal cornet at Enfield and a powerhouse player with a beautiful sound and stamina to carry the section.

A great bloke and leader who earned utter respect by playing not talking. Master of the withering 'down the front bench look' and expert bubble blower.

Have reduced him to tears of laughter just once and few can say that – he will remember when.

Organist at Leeds Parish Church and my school music teacher.

A fiendish accompanist, supremely talented musician and massive character too.

Hauled me by the ears out of his choir practice on many occasions and taught me more than I can ever imagine just by hearing him play.