There are plenty of mountains in this part of the world, so it shouldn't be hard for these competitors to know what to make of these Mountain Views. 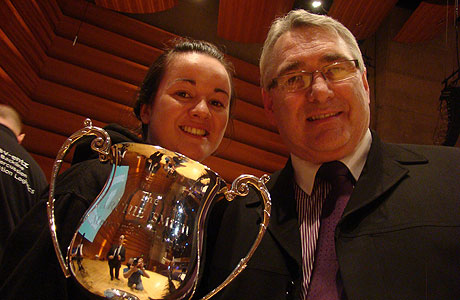 If the magnificence of the ‘mountain views’ in Scotland are anything to go by, the ten bands competing for First Section honours in Glenrothes should feel pretty well at home in their attempts to scale the heights of Bertrand Moren’s somewhat unspectacular vision of the alpine surroundings of his native Switzerland.

As has already been discovered in the North West and Yorkshire, the slopes of Moren’s musical terrain are not quite as treacherous as one might expect for a First Section test piece, although that isn’t to say that there isn’t the odd moment of vertiginous danger along the way.

Roger Webster and Steve Pritchard-Jones will be the men presiding over an evenly matched field, the ultimate two qualifiers from which will be hoping to improve on Scotland’s poor showing of 10th & 18th in Cheltenham.

Arbroath Instrumental under the prize winning Michael Robertson will enter the fray as one of the favourites, after just missing out on qualification in 3rd place last year, whilst they also secured an excellent runner up spot in the Scottish Challenge Shield.

Bathgate’s 8th place last year leaves the talented Eoin Tonner and his team in vulnerable territory with a strong result needed this time around to avoid the fall through the relegation trap door.

Meanwhile, Alan Duguid will head relegated Bon Accord Silver’s attempt to get straight back to the top flight, no doubt encouraged by gaining the runner up spot at the Fife Charities contest last October.

Promoted on the back of a 12th place at the National Finals, City of Discovery were forced to withdraw from the Scottish Challenge Shield, but last year’s Second Section champion will hoping to be back to fighting fitness for their return under the baton of Bruce Wallace.

Clackmannan is always  band to look out for here and this year Paul McKelvie OBE will sure to be gunning for an improvement on last year’s 4th place following a respectable podium finish at the Scottish Challenge Shield.

Dalkeith & Monktonhall’s only contest outing since finishing 7th at the Scottish Championships last year was a mid-table finish at the Fife Charities Contest in October, so they will be looking for success under the direction of Whitburn’s flugel player Jim Chamberlain.

Meanwhile, newly promoted Granite City Brass and Alan Haggard will be keen to stamp the band’s authority on the First Section, as they look to build on their encouraging performance at the Second Section National Finals in Cheltenham.

Qualification for the final will be high on their agenda.

Newmilns & Galston will BE hoping to move up the table after finishing 9th last year, and will no doubt by helped by leaning heavily on the experience of Nigel Boddice MBE.

Finally, Russ Young there should be a strong challenge from Unison Kinneil who find themselves in the First Section for the first time since 1996, after a sixteen year tenure in the top flight.

Results in 2011 didn’t entirely go the band’s way with a runner sup spot at Brass in the Park the highlight, but that will only serve to strengthen the band’s resolve in Glenrothes.

There are plenty of bands with points to prove on this set work, but we reckon that it could be a close tussle between Bon Accord Silver and Unison Kinneil for first place.

Arbroath Instrumental is likely to push them all the way and should end up in the mix whilst Clackmannan could also be in with a real shout, with Johnstone Silver and Batgate.

Our dark house is newly promoted City of Discovery.

Scottish Bands at the Finals: