4BR Editor Iwan Fox looks forward to the battle for qualification places in Bedworth this weekend. 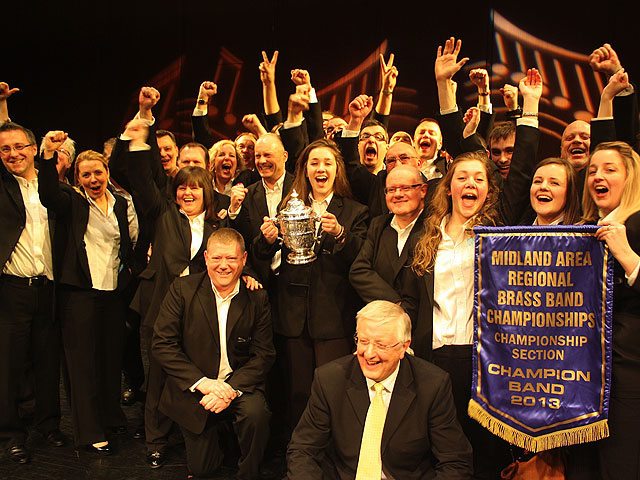 Right in the heart of England, a fantastic line up of 78 bands (second only to London & the Southern Counties) will take to the stages of the Civic Hall and Nicholas Chamberlaine Technology College in Bedworth.

There is a growing confidence about Midlands bands that now make it through to the finals of major events such as Cheltenham and London - from the likes of Desford, GUS and Jaguar Land Rover in the top flight all the way down to Ifton Colliery in the Fourth Section, who won the recent Butlins title in fantastic style earlier this year.

Since 1992 the region has produced eight National champions, and whilst you have to go back a few decades now for an Albert Hall victory, four winners have come in the First Section, whilst there were top six finishes for no less than six qualifiers at Cheltenham last year -including three podium placings.

No wonder there is a bit of a swagger about the bands in these parts, and with the excellent facilities on offer backed by great organisation, no wonder the beating heart of British banding keeps pumping healthily.

As always there is a big old field of well matched competitors lined up in the Fourth Section trying to claim one of the three qualification places on offer courtesy of David Lancaster and Ewan Easton.

Both are fine musicians who talk a great deal of detailed common sense tail in their pre-results remarks - ones that are invariably backed up by the eventual results.

There should be no complaints then after they have taken a forensic microscope to ‘Three Spanish Impressions’.

Each of the movements asks bands to explore style, colour and texture; from the slowly brooding opening to the delicate waltz, with its echoes of touching romance, and the snappy fandango finale - all flouncy dresses and swaggering machismo - much like a Saturday night out in downtown Smethwick then.

The best in Bradford managed to capture the sweaty Iberian style as well as overcoming the sweaty technical challenges, so will that also be the case here?

There is a great deal of strength in depth on show - with Ifton Colliery in particular perhaps one of the shortest priced pre-contest favourites around if they can play to the form they showed in winning the Butlins title.

However, there were also good shows at Skegness from Sherwood Forest Brass and Whitwell, so they should head to Bedworth with confidence bubbling to perfection like a Brummie lass under a sun bed.

Ratby Co-operative Mid, Stourport on Severn and Fairfield, all relegated from the Third Section will be keen to make a mark alongside our dark horse of Pleasley Colliery.

Another well matched section of highly competitive rivals have three places to battle over if they are to get to Cheltenham.

Philip Wilby’s set work has been a delight, but one that has shown that to capture its elegant sense of nostalgia, bands have to get the basics right - from the rhythmic passages of the imposing ‘Towers & Chimneys’ and fleet footed ‘Lord of the Dance’, to the lilting beauty of ‘Sunday Afternoon’ and the breezily patriotic ‘Coronation Day’ finale.

Those who did it right at Bradford drew you back to Yorkshire days of old – all 1953 flat caps, Brylcream footballers and Britain conquering the world.

Will that be the case here we wonder?

There are two very experienced musicians in the box who have both played at the very highest level - so any attempts to try and musically ‘photoshop’ a few portraits to make them sound something they are not, will be found out.

Another difficult one to call: There are pretty strong cases to be made for just about every one of the 17 challengers.

If we are to stick our necks on the line though, then the likes of Hucknall & Linby, Rushden Town, Stamford Brass and Foss Dyke may well be in the mix alongside Resdev Market Rasen and Towcester Studio.

You can never write off the hopes of the students of the University of Warwick though - especially if they have been able to cram in a bit of practice between their usual swatting regimes...

The Midlands has produced the great wordsmith or two over the years, so the band’s here should feel at home with the literary inspiration behind Michael Ball’s lovely, ‘Chaucer’s Tunes’.

Whether or not they will feel quite the same way come the announcement of the results is another matter all together, but they can rest assured that they have two very well read men in the box in Stephen Roberts and Ian Brownbill.

As we have said before, whether the MDs have been inspired to read Geoffrey Chaucer’s ‘Canterbury Tales’ as a result of each of these four movements is another matter, although they should have certainly gained a better insight into some of the characters that are so cleverly brought to life.

The dislocated rhythms of the opening ‘Intrada’ lead into the simple beauty of the hymnal ‘Alma Redemption Mater’, before the troubling, but witty tale of promised fidelity in the ‘Wife of Bath’ segues into the bold splendour of the Christmas carol, ‘Es ist ein’ Ros’ entsprungen’.

Get the source material right and two bands will be heading to Cheltenham - get it wrong and they could be heading home looking for literary inspiration from the next Katie Price novel...

To mangle that famous Midland playwright’s saying: 'Who is it going to be or not to be then'?

A hard one to call, but Daventry came close to qualifying last year and could well be the band to beat this time around, whilst we like the look of promoted Ireland Colliery and Shirland Welfare to battle it out for the second qualification spot.

Brackley and Tintwistle will want to make an immediate mark following relegation, with the likes of Avonbank (Evesham) and our dark horse of Bakewell Silver bands to watch out for too.

Did you know that West Brom’s ‘Hawthorns’ ground is the highest Premier League stadium above sea level in the whole of the English leagues?

If you did then that’s about as much use to you as knowing about the Alpine inspiration behind the rather underwhelming ‘Cry of the Mountains’ by Howard Lorriman, which faces the 17 contenders here on Saturday morning.

How on earth this will prepare these bands for the rigours of a piece like ‘St Magnus’ in future heaven knows, but it still has just enough about it to separate out the Chris Bonningtons from the Stanley Boddingtons by the time one of them plants their flag on the musical summit.

Both David Lancaster and Ewan Easton will appreciate the effort involved; from the opening ‘Awakening’ and craggy ‘Snow, Ice & Glaciers’, to the panoramic views of ‘Vistas & Distant Peaks’ and the frightening instability of the final ‘Avalanche’, so quality should win out, even if reaching Cheltenham won’t really require the aid of crampons and an army of sherpas.

There is a very solid look to the field of rivals here - and with three places up for grabs this could be a very enjoyable fight for glory. All look pretty capable of meeting its challenges.

That said, the band that everyone may be looking to beat is Staffordshire, who took the title here in fine fashion last year and went on to come runner-up at the finals. More of that form and they will surely be heading back down the M5 come September.

Blidworth Welfare and promoted Bilton Silver (Rugby) look well equipped to join them there, although they may be pushed all the way by the likes of City of Coventry, who showed their quality at Butlins, Langley and Wigston. Our dark horse is Shirley.

There is the promise of a tasty old scrap to round off the Midlands weekend, with 11 closely matched contenders looking claim the two places on offer to slug it out with the big boys at the Albert Hall in October.

Promise really is a key word in terms of top flight banding in the region - with the likes of Desford, Virtuosi GUS and last year’s winner Jaguar Land Rover seemingly all on the cusp of bridging the gap between honest midfield finishers and potential top six contenders at the majors.

It hasn’t quite materialised like that yet though - but whoever gets through will have shown their class in overcoming the most severe of tests on ‘St Magnus’.

Much for Brett Baker and David Horsfield to ponder as the bands look to marry technique to musicality, pace to clarity - requisites that were in abundance with the very best in Bradford for sure – even if there was a bit of smoke and mirrors going on at times.

If the Desford that performed at Butlins shows up after a year’s sabbatical then they could be the band to beat, whilst in contrast, if the rather spluttering Virtuosi GUS of Skegness appears once more then they could be facing an empty weekend in their October diaries.

On their day both seem to be just a little bit of a class part from the rest of this field - even from an increasingly impressive Jaguar Land Rover; so any mistakes, big, small, beginning or end, may prove very costly.

Thoresby Colliery could also be a band to watch out for after they impressed at Butlins, whilst Newstead and Derwent are solid and consistent challengers.  Our dark horse is Ratby Co-operative.