The cherry on the top
National Youth Band returns for Easter

The National Youth Band of Great Britain makes a three day return to live action after the challenges of Covid19. 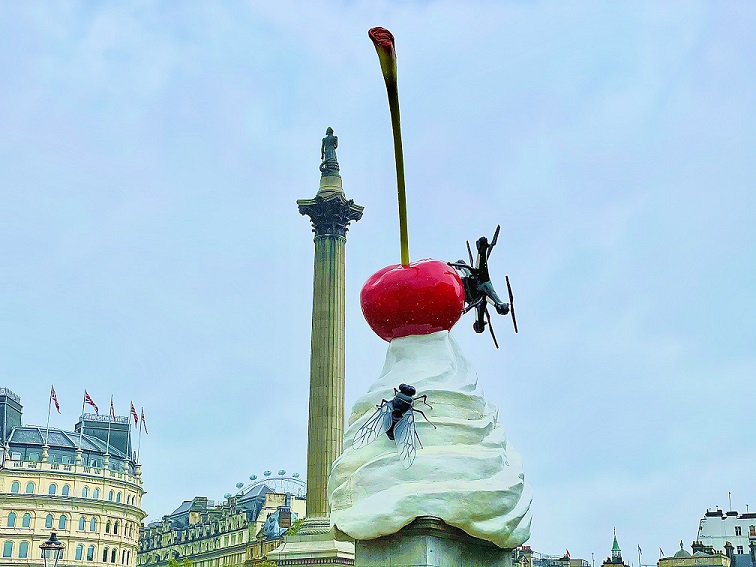 The National Youth Brass Band of Great Britain has faced many challenges since its formation in 1952.

Never though has the ability of the organisation to deliver on its ambition of musical excellence been so severely tested as it has in the past 12 months or more.

Social exclusion has been one of Covid-19’s meanest characteristics - isolating youngsters from enjoying the type of communal experiences and activity that form the backbone of their development.

Connecting via Zoom or playing in ‘virtual ensembles’ via a laptop perched on a kitchen table is no substitute for the sound of real-life teenage chatter or the support that comes with sitting next to a banding friend as you follow the beat patterns of a conductor standing in front of you.

Social exclusion has been one of Covid-19’s meanest characteristics - isolating youngsters from enjoying the type of communal experiences and activity that form the backbone of their development.

Little wonder then that the sound of live performance was a thing of joy to hear as the youngsters on the 2021 Easter Course met up (with adherence to Covid-19 guidelines) at Stoller Hall in Manchester, Malvern College in Worcestershire, and St Martin-in-the-Field in the heart of London this week under guest conductor Ian Porthouse. 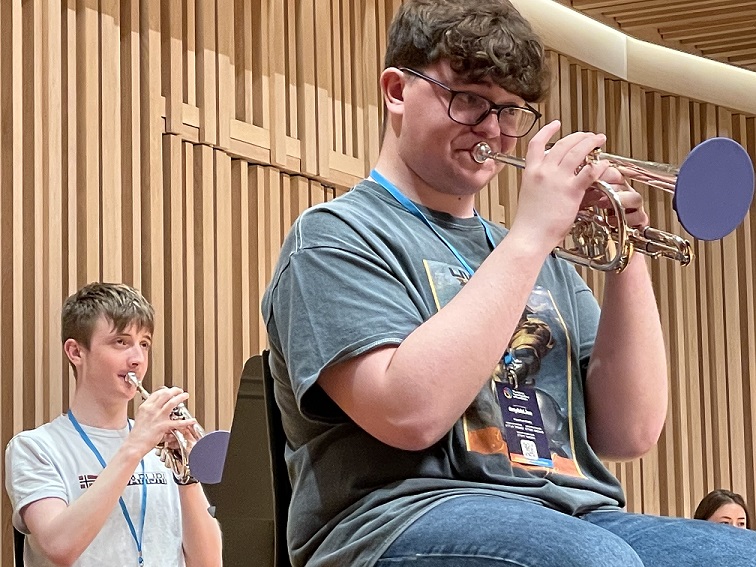 In a way the music making was almost secondary – it was the sound of laughter and gossip, eagerness and enthusiasm being brought together again that put a smile on the face.

“It’s been a remarkable achievement by the management team to get things done this way,” Ian said at Stoller Hall as he put the first group of 29 players through their paces on the appropriately titled, ‘Brass Triumphant’  by Gareth Wood.

“CEO Mark Bromley, Artistic Director Bob Childs and especially Operations Manager Richard Milton along with others deserve huge credit for the way in which they have approached things.

It was almost surreal to be able to get onto a stage and direct a performance again – but the response from the players has been amazing.”

Mark Bromley has spearheaded the rejuvenation of the organisational foundation of the band in the past 12 months or more – using the challenges posed by Covid-19 as an opportunity to give the National Youth Band a more immediate ability to respond to change and a vision to look outwards.

The appointment of Bob Childs and Richard Milton has also provided clear structure and purpose: Inclusion and diversity are both understood and implemented artistically and socially; the voices of the players are heard and acted upon – from the music performed to the use of social media and the responsibilities that come with it through to the design of the website, logo and leisure wear. 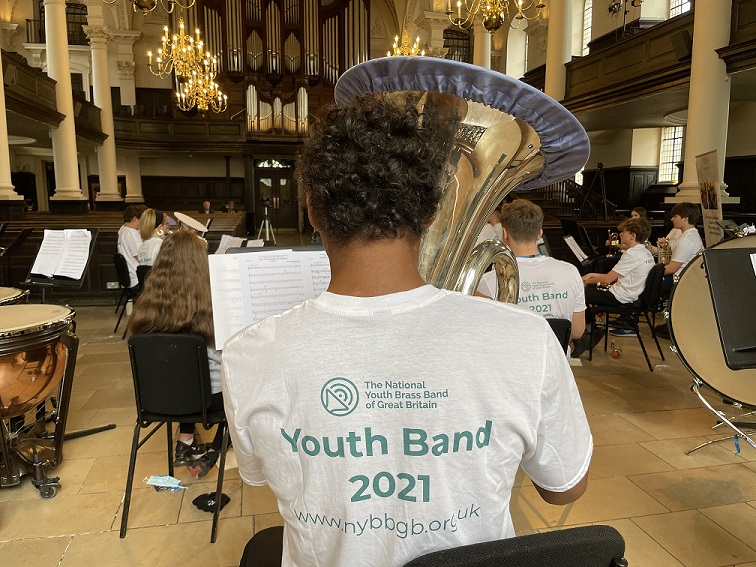 Elsewhere, funding development is now undertaken by Louise Shaw who has extensive experience of the sector, whilst marketing and digital design is handled by Ben Stratford. Others have defined roles to play – from finance to filming, pastoral care to helping hands. 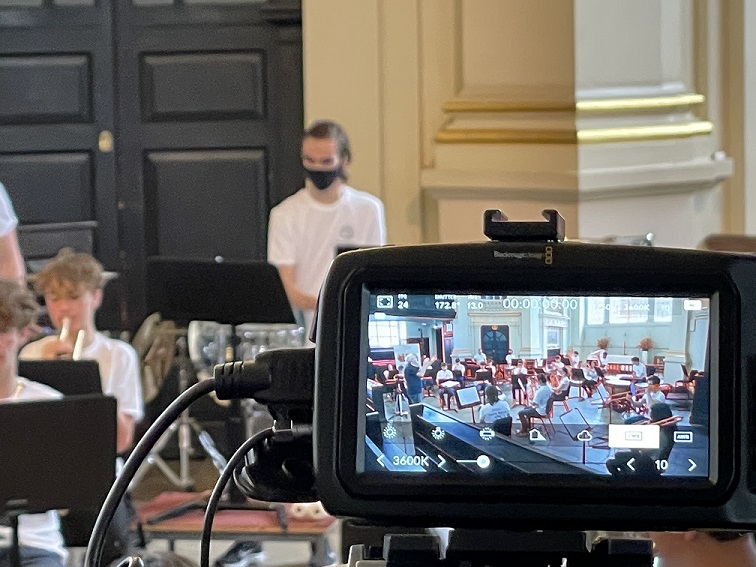 “We are listening to what they want to get out of being members of the National Youth Band – from their first Children’s Band course to their last Youth Band performance,” Mark said as sat listening to the third day at St-Martin-in-the-Field in Trafalgar Square.

“And by listening to the players (through their elected band representatives) we were able to tailor what we did on our virtual initiatives to lead to these fantastic three days and then onto the Summer Course under Philip Harper.”

He added: “The organisation has a proud history and an amazing artistic legacy through world class musicians such as Bramwell Tovey, but I think we also have a great future ahead of ourselves.”

The organisation has a proud history and an amazing artistic legacy through world class musicians such as Bramwell Tovey, but I think we also have a great future ahead of ourselves

And at a time when every penny must be accounted for with transparent value for money to satisfy the requirements of the Arts Council England and Department of Education funders, the ambition to keeping driving the organisation forward is being fuelled with equal clarity of thought.

“The artistic foundations of the National Youth Band are deep,” Bob Childs said in Manchester. “Just look at what people such as Bram Tovey inspired. We have a duty to carry that on and to develop it further. It’s an exciting new chapter for the organisation and the likes of Ian Porthouse and Philip Harper are the ideal people to do just that.”

I want us to be as artistically ambitious as possible and to reach out to as wide an audience as we can.”

No lack of ambition

Speaking to the young players at Manchester, Malvern and London also confirmed that they do not lack for ambition in their lives either - with the band providing a touchstone they all felt would give a lasting connection whatever future paths they wish to explore. 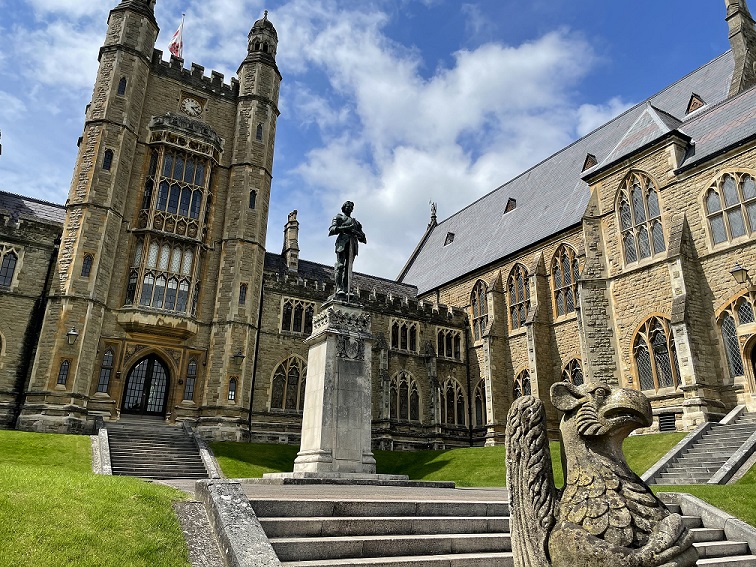 “That’s always been one of the great attractions of being a member of the band,” 18-year-old cornet player Marcus Gatenby from Kirbymoorside Band added as he revealed that he soon hoped to take the first steps on a musical career with the RAF.

I’m between a choice of music and science at the moment, but whatever I choose, brass bands will still be an important part of what I do.

Meanwhile, 17-year-old Abi Ornadel is looking toward politics. “That’s my aim, but I will always have my music and my trombone. I know I can enjoy them both.”

That was the long term aim shared by Bethan Spragg, who plays cornet with Redbridge Band. “I’m between a choice of music and science at the moment, but whatever I choose, brass bands will still be an important part of what I do.”

Others are already developed their choices with the band boasting the three prize winners of the recent Geneva Heritage Cornet Solo Competition - Luke Barker, Lia Teague and Megan Newbury. 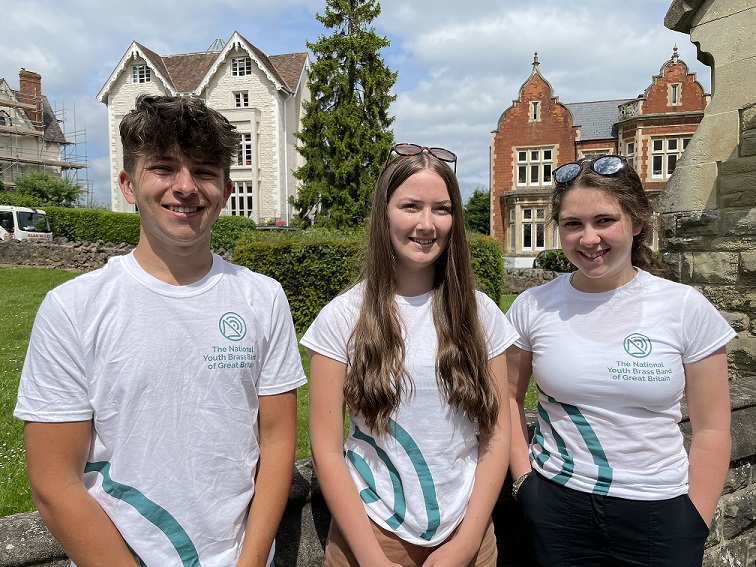 Luke, who plays with Flowers Band and is studying at the Royal Birmingham Conservatoire was the overall winner of the event and is also one of the band representatives tasked with putting forward the opinions and viewpoints of the players to the management.

“I’m proud to take on the role. We feel that we are being listened to and our ideas acted upon – from the music performed to social media input.

The experiences we have with the National Youth Band set us up for life – in and out of the banding movement and we want to play our part for the next generation too.”

Meanwhile, the likes of 16-year-olds Christopher Oddy from Youth Brass 2000 and Owen Parr from Macclesfield, and 15 year old Lewis Barton from Elland Silver Band, have already used their experience to further their musical ambitions.

Both Christopher and Owen are exploring composition and conducting whilst Lewis has made his mark winning the Foden’s on-line solo event and playing at top section level with Elland.  They are not alone, with players already being scouted by some of the top bands in the country. 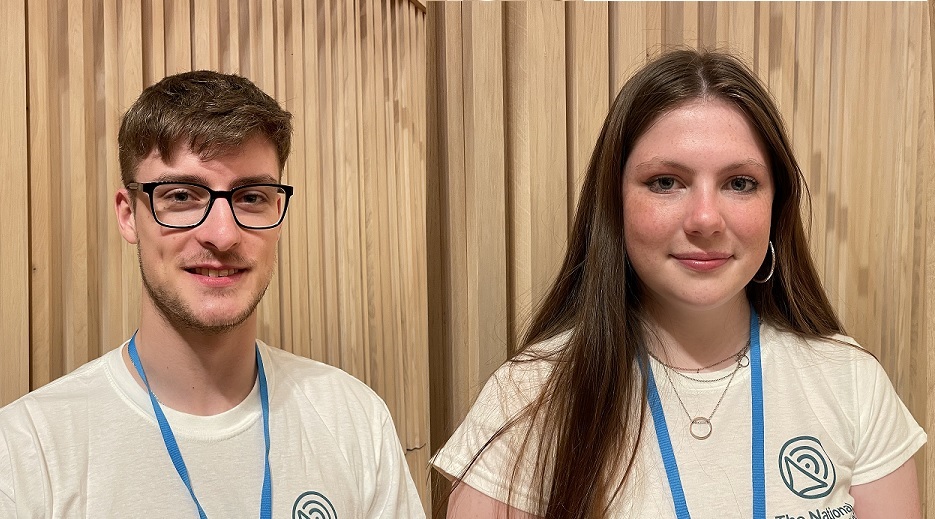 Careers ahead for Marcus Gatenby and Florence Wilson Toy

“That’s testament to the talent of all the players that they are making their mark with bands and ensembles,” Ian Porthouse added.

“It’s been great to hear them speak so enthusiastically about what playing in this band has meant to them and how it will play such an important role in their future.

It doesn’t matter at what level or what genre – the National Youth Band of Great Britain’s job is to inspire them to perform and to love making music for the rest of their lives.”

I think we have all missed our friends. It’s been great to see them again and catch up

Whatever the future holds the immediate feeling over the three days was much more personal for all those involved.

“I think we have all missed our friends,” 16-year-old cornet player Florence Wilson Toy, who is studying at Chetham’s School of Music, said. “It’s been great to see them again and catch up.”

Meanwhile, 18-year-old sop star Matt Hall summed it up perfectly: “It’s just great to be back playing in a band again.”