There’s another great prize on offer with our quiz, sponsored by Ev-entz.

Once again there is a great prize from 4BR and our friends at Ev-entz — as long as you can get your thinking caps on?

After all the great music heard at the recent RNCM Festival of Brass, we have a quartet of fantastic CDs — including the latest from two of the young Belgian tyros who thrilled the Manchester cognoscenti – Harmen Vanhoorne and Glenn Van Looy.

We have the brilliant ‘Fortune’s Fool’ and ‘Move their Mind’ up for grabs as well as a cracking CD from tuba star Ian Foster who delivers ‘Handel to Valhalla’, and Stavanger’s latest ‘Brass Blot’ – with music from Torstein Aagaard-Nilsen, Gary B Peterson and Hakon Berge

With the 4BR Editor off to enjoy the delights of the Norwegian Championships in Bergen on the weekend, this week’s question has a Nordic sporting feel.

He once managed a team that included World Cup winners Bobby Moore, Geoff Hurst and Martin Peters, England still qualified for the World Cup Finals in Spain and as manager he picked Viv Anderson to become the first black player to play for England.

All answers for this one must be in by midnight on Sunday 10th February.

We had a great response to last week’s quiz, with Stephen Clayton knowing that the French musician and author of a method of instruction, who was born in Lyon on February 28th 1825 and died in Paris on April 8th 1889 was of course Jean Baptiste Arban.

He can now look forward to getting to grips with Paul McGhee’s exotic test piece ‘Waiting for a Pain Hit!??!!?’ as well as, ‘A Breathless Gnu Kiss!’ written by Norwegian composer Idar Torskangerpoll – plus,CDs from trombonist Simon Johnson, Derick and Stephen Kane and a classic oldie from Steven Mead.

E-mail us the answer at: quiz@4barsrest.com 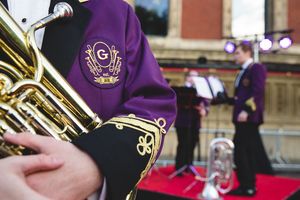 Grimey set for another National victory...

May 24 • The stage is set for Grimethorpe aka Grimley Colliery Band to win the National title once more at the Royal Albert Hall...

All that jazz and more...

May 21 • Two ensembles from Brass Band of Battle Creek made sure the local population was left in no doubt who was in town this weekend...

May 21 • The 26th French Open Championships will take place in the wonderful Loire Valley town of Amboise next month.

May 21 • The wonderful sounds of brass bands playing in public bandstands will be heard again in Leeds this year.