Filton Concert will team up with Dutch conductor Erik van de Kolk for their West of England challenge in Torquay.

Fresh from their recent Welsh Open hat-trick win in Porthcawl, Filton Concert Brass have announced that Dutch conductor Erik van de Kolk will lead them in the upcoming West of England Area Championships in Torquay.

Erik studied conducting at the Royal Conservatory in The Hague, and in 2011 won the European Brass Band Championship Conductors Competition in Montreux, taking home not only the jury honours, but also the band and audience prizes.

He spent a decade at Brassband Rijnmond until the summer of 2019 and in 2012 conducted the European Youth Brass Band and was guest conductor with the Royal Military Band between 2015 and 2016. He has also worked with Stavanger Band in Norway, aiding their preparations for the 2018 European Championships.

Speaking about the exciting link, Band Chairman James Bryant told 4BR: "We're delighted to secure the services of such a talented conductor. Erik's enthusiasm and work ethic are an ideal fit for us after retaining the Welsh Open title.

We're really looking forward to welcoming Erik to Bristol and working with him in the run up to Torquay." April 2 • In a new series of major interviews with leading conductors, players and personalities around the banding world, 4BR Editor Iwan Fox catches up with Cory MD, Philip Harper... 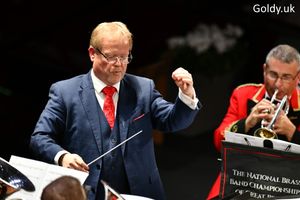 5 minute masterclass with Russell Gray No 2

April 2 • Russell Gray provides another mini masterclass on the art of conducting... Get ready for some home practice with Roger Webster

April 2 • Brass Bands England is holding its latest on-line development programme with Dr Roger Webster this evening — so make sure you sign up fast. April 2 • Despite the ongoing Coronvarius pandemic the New Zealand National Championships are hopefully very much on the banding calendar according to its President.