Innovation 216: A Concert under the wings of Concorde 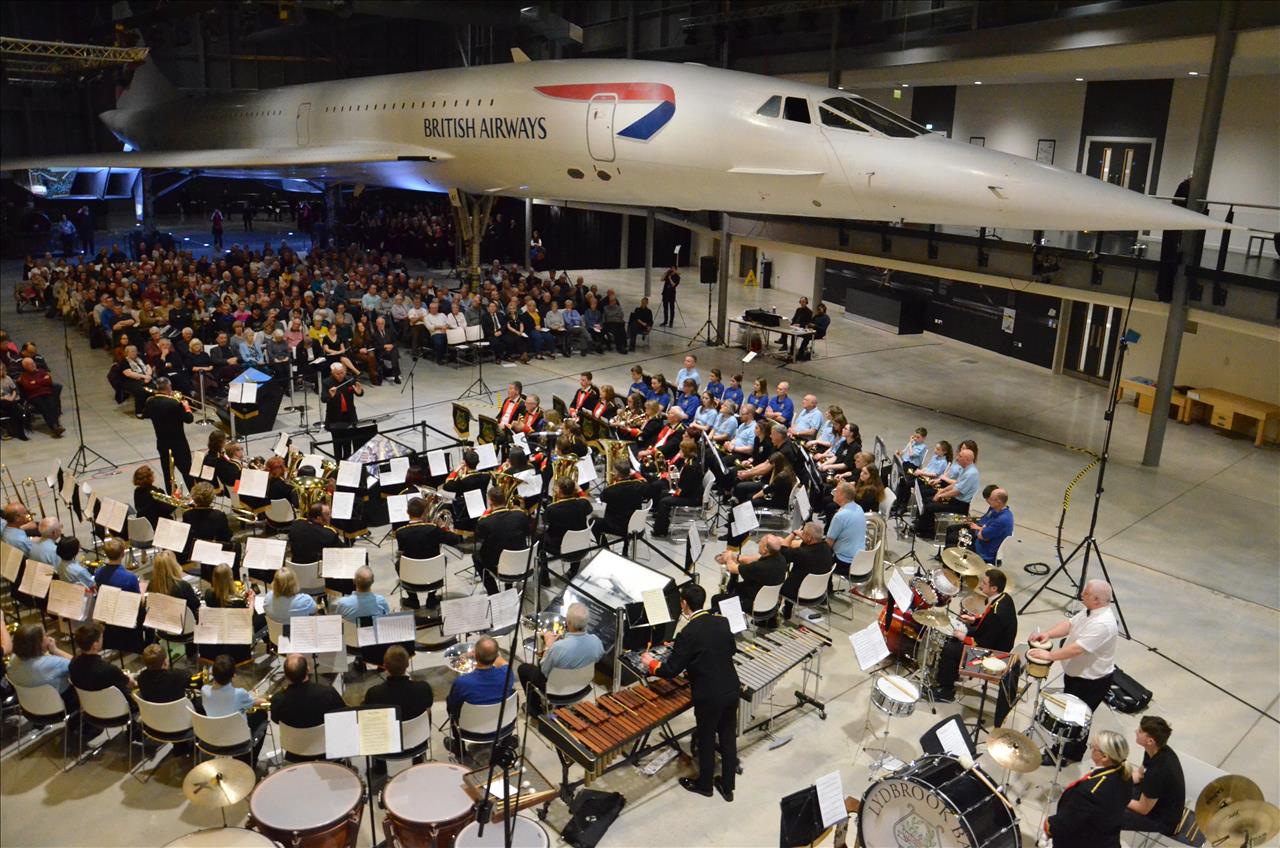 Such was the appeal of this concert that tickets were sold out several weeks in advance.

Playing under the wings of one of the 20th century’s icons was attraction enough (the 216 was the last Concorde to fly), but adding a thoughtful programme of music that cleverly incorporated the talents of 280 brass and choral musicians (6 choirs of singers unde their conductors) celebrating a century of Bristol’s aerospace history also made it memorable.

Led with expert facility on the night by conductor Ian Holmes it was the culmination of over 3 years of planning, with the programme reflecting the beauty of flight through aspects of Bristol’s aerospace history.

The evocative sounds of Ron Goodwin’s ‘633 Squadron’  and ‘Those Magnificent Men in their Flying Machines’, Eric Coates’ ‘Dam Busters March’  and the Sinatra classic ‘Fly Me to the Moon’  were obvious in their inspirations, but it was also good to hear the music take flight with Benjamin Britten’s ‘Gloriana’  and ‘Concord’.

Paul Lovatt-Cooper’s ‘Enter the Galaxies’  and Gavin Somerset’s ‘Spirit of Brass’  gave an upbeat feel to the opening of both halves, whilst the a capella ‘Bowie Space Medley’, the trombone solo ‘Wind Beneath My Wings’, ‘Post Horn Galop’ and ‘Flower Duet’ from ‘Lakme’ made for well grounded diversions.

The centre-piece was the finale however and Liz Lane’s ‘Innovation 216’ that celebrated Bristol’s connection to some of the great aeroplanes of British history; from the earliest Bristol Boxkite biplane and Blenheim light bomber, to the Brabazon, Britannia and of course, Concorde.

It was wonderfully immersive music making - the timeline represented within the brass and percussion from the fragility of the early wooden flying machines to the sonic boom of the space age supersonic superstar, perhaps the ultimate combination of technological and aesthetic aeronautical beauty.

It was wonderfully immersive music making - the timeline represented within the brass and percussion from the fragility of the early wooden flying machines to the sonic boom of the space age supersonic superstar, perhaps the ultimate combination of technological and aesthetic aeronautical beauty.

The clever use of the Doppler effect, particularly in the percussion, and the neat intertwined BAC musical motif (representing the Bristol Aeroplane Company, Bristol Aero Collection and Aerospace Bristol), heard at the beginning and the end, was enhanced by an accompanying text sung by the choir in the final section (the poem ‘Bird of Paradise’ was read at the start) and which brought the work to a glorious conclusion.

All this and aviation enthusiasts in particular had the rare opportunity to hear from former Concorde pilot Tim Orchard, who holds the joint world record of flying the plane from New York to London in record time.

As one member of the audience was heard saying on the way out – “It was a supersonically stunning performance."