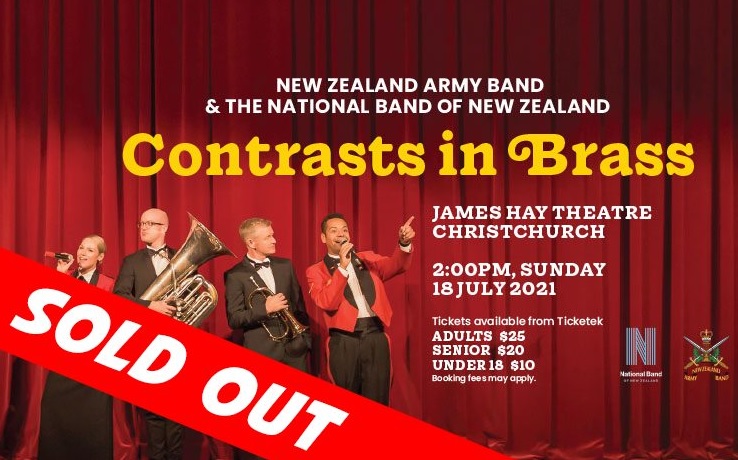 The title of this splendid concert held to round off the 2021 New Zealand National Championships was in part a metaphorical message of hope to the rest of the banding world.

With the country emerging successfully from the Covid-19 pandemic, the weekend was held in an atmosphere of inclusion (with an absence of social distancing measures for performers and audiences alike) and encouragement – from the high quality individual competitions to the displays of excellence in each of the Grade contests.

That was not lost on those packed into the James Hay Theatre (or listening thanks to the livestream broadcast) when the New Zealand Army Band finished off their second half set with ‘Bridge over Troubled Waters’.

Others around the globe are still being battered by tempestuous Covid waves.

This though was music making that sailed above the squall with typical Kiwi fortitude and intelligence – the National Band, led by a relaxed David Bremner offering a first half of well-chosen repertoire from a neatly paced Widow’s  ‘Toccata’  through to the precisely placed quaver pick-up tread of the marching Roman legionaries in  ‘The Pines of Rome’.

The contrasts from the New Zealand Army Band were equally polished (their ranks including seven members of the National Band).

A Big band  ‘All Night’  thumper from Lionel Ritchie to  ‘Black Dog’  blues via Frank Sinatra, ‘Wicked’, Simon & Garfunkel and a ‘Kiwi-ana’ medley were played and sung with stylish character.

The audience would have stayed all afternoon for more, whilst the rest of the banding world would have simply been thrilled to have experienced a part of it first-hand for themselves.