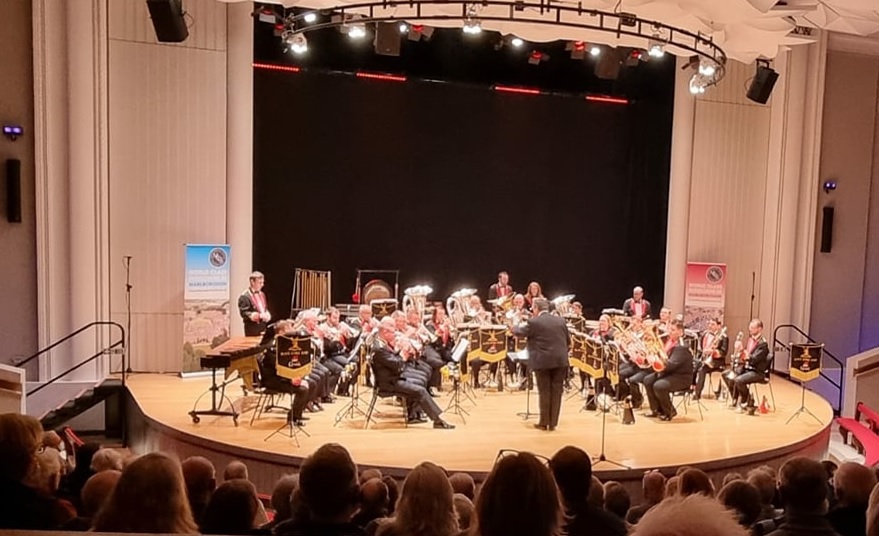 Marlborough College has a history that stretches back to 1843; a decade or so before the founding of their celebrated Queensbury visitors for this ‘Concert for Everyone’ at its elegantly colonnaded Memorial Hall.

The 560 seat semi-circular auditorium was well packed – testament to an annual programme of high quality events as well as the college’s own commitment to providing what they refer to as its ‘inclusive’ musical opportunities for students - from rock and pop to symphony orchestra and Big Band.

They may wish to add a brass band to their educational offering following the standing ovation given to Black Dyke after an absorbing programme showcasing the full colourful kaleidoscope of their repertoire spectrum.

Shostakovich, Elgar, Holst and Respighi sat next to Malcolm Arnold, Eric Coates, Bruce Broughton and Eric Coates like an honours-board list of past alumni, with added virtuosity provided by Paul Lovatt Cooper, Pablo de Sarasate, Darrol Barry and Robin Dewhurst. Even the demanded encore was a bit of spiced up J.S Bach.

They may wish to add a brass band to their educational offering following the standing ovation given to Black Dyke after an absorbing programme showcasing the full colourful kaleidoscope of their repertoire spectrum.

It was a cleverly conceived programme by Prof Nicholas Childs; the broad sounds of Holst’s ‘Jupiter’  and thrilling robustness of ‘Festive Overture’  balanced by Richard Marshall’s touching lyricism on ‘Melody of the Heart’  and the suave fun of the ‘James Bond Suite’.

Michael Cavanagh’s evocative ‘Carrickfergus’ on baritone and the Hollywood widescreen excitement of Bruce Broughton’s ‘Heroes’  brought the first half to a thrilling touchdown - the latter driven with controlled power and technique.

A very ‘English’ musical cul-de-sac enclosed the virtuosic pyrotechnics of Daniel Thomas on ‘Zigeunerweisen’  after the break; the bravura ‘Dambusters’  march followed by Arnold’s ‘Cornish Dances’, which hides its melancholic undercurrents in plain sight, a lovely ‘Upon Green Vales’  horn solo from Siobhan Bates and the sumptuous tonality of a flowing ‘Nimrod’.

The enormous ‘Pines of Rome’  which stomped into view seemingly from the mists of time, and the fizzy-pop ‘Toccata in D minor’  brought the audience to its feet and an embracing concert to its conclusion.