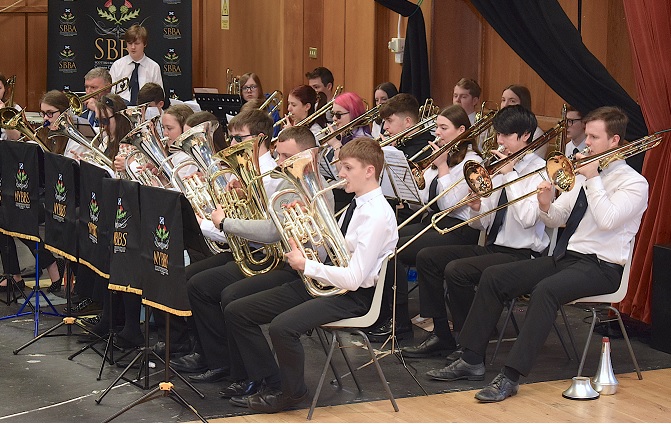 After the frustrations of Covid isolation, the National Youth Band of Scotland returned to its Easter Course at Strathallan School with unbridled eagerness.

The Scottish Brass Band Association’s enlightened approach in maintaining personal as well as musical connections between players and staff during the hiatus had ensured that it was also underpinned by a sense of revitalisation rather than resurrection.

The reward for the long term planning will soon see the band head to Birmingham to play in the Development Section of the European Youth Band Championships; a debut appearance driven not just by the enthusiasm to represent their nation with pride, but with an insatiable appetite to make up for lost time.

That was obvious after four days of music making by the combined forces of the senior and reserve bands, with John Boax leading the audience of family and friends through a showcase of the repertoire that will be performed at Symphony Hall.

The 20 minute contest programme opened with ‘Starburst’  by Dan Price - energised and driven, with the great perc team stoking the tempo boosters.

That was obvious after four days of music making by the combined forces of the senior and reserve bands, with John Boax leading the audience of family and friends through a showcase of the repertoire that will be performed at Symphony Hall.

The evocative sounds of ‘Elegy for Dunkirk’  from the film ‘Atonement’  provided an evocative weave of reflective tonality, before the first half was rounded off with the European set-work, ‘Corineus’  - Christopher Bond’s cleverly conceived imaginings of mythical Cornish mayhem and magic.

Musical Director Ian Porthouse led the second half; the opening ‘Flourish for Band’, a bold fanfare reminder that 2022 will see a great deal of Vaughan Williams music being played from the contest and concert stage.

Alan Fernie’s ‘Prismatic Light’  (with the composer enjoying himself in the trombone section) contrasted with the rich scoring of ‘Hymn for Diana’, before the concert was rounded off with the cinemascope demands of ‘The Gael’  from ‘Last of the Mohicans’.

It was played with the type of confidence that should hold the band in good stead when they head to Birmingham and their European challenge.