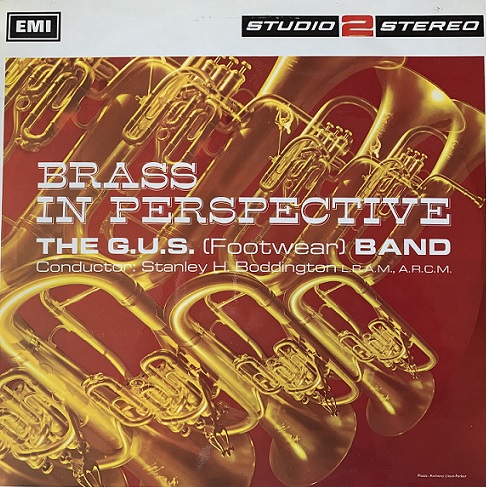 Historically, brass bands have always found it difficult to place themselves in quite the right musical perspective.

Now, with the prospect of no return to the contest or concert stage until 2021, the need to reappraise the insular value we place on ourselves in context to the wider musical world is perhaps greater than ever.

In its way, nothing has much changed since this LP from a very fine GUS (Footwear) Band was released in 1968.

The times they are a-changing

That was the year of the Soviet backed invasion of Czechoslovakia, the assassination of Robert Kennedy and Martin Luther King, Flower Power pop music and the counter culture at its peak, student riots in Paris and Enoch Powell’s ‘Rivers of Blood’ speech.

Four years previously Bob Dylan sang ‘The times they are a-changing’, and within months a man was standing on the moon.

Yet here was an LP that placed arguably the finest band in the world absolutely bang in the timeless slow beating heart of a brass banding middle England that seemed almost oblivious to what was going on around it.

Forget hot pants, Jane Fonda as Barbarella and Harold Wilson’s 1960s ‘White Heat of Technology’ revolution – this was yet another bucolic picture painted of brass bands as a form of Edwardian moral rectitude patronage.

Yet here was an LP that placed arguably the finest band in the world absolutely bang in the timeless slow beating heart of a brass banding middle England that seemed almost oblivious to what was going on around it.

To be fair to the band – you suspect they didn’t have much say in the matter - its playing that has admirable precision, balance and style (and a super soloist), even if a bit too much vibrato for modern tastes.

However, the sleeve notes by the mysterious author, P.A.C. make you cringe. He simply placed the band within a ‘perspective’ of 650 workers who “joined together in a happy occupation of their leisure hours with beetle drives, skittles and table tennis.”

To him (and you suspect it was a ‘he’) the band was simply 28 men meeting on the “top floor of the three storey warehouse to practice their music making” – “...a most unlikely place to expect to hear the strains of Beethoven or Gershwin” (neither of which were featured on the release).

Well meaning he may have been, but it was a perpetuation of stereotype noblesse-oblige patricianism.

Perhaps banding at GUS (Footwear) was like that in 1968, but to the general public it also ensured that it was an image that hadn’t changed come ‘Brassed Off!’ 30 years later – or perhaps even today for that matter.

It was summed up by the description of MD Stanley Boddington driving in his car into the “beautiful green countryside of Northamptonshire at six o’clock in the morning”, to study the score of the National Final’s test-piece amid “the quiet tranquillity of the fields and streams for a couple of hours before he goes to the factory and his job”.

Perhaps banding at GUS (Footwear) was like that in 1968, but to the general public it also ensured that it was an image that hadn’t changed come ‘Brassed Off!’ 30 years later – or perhaps even today for that matter.

Puppet on a String

These records still sold well at the time (GUS had a recording contract with EMI for nearly 20 years) – and the pop charts that year not only had number 1 hits from the Rolling Stones, Beatles and Beach Boys, but also by Des O’Connor, Georgie Fame and Louis Armstrong.

However, what would a typical brass band audience of today think of hearing a version of Conchita Wurst’s Eurovision Song Contest winner entry, let alone Sandy Shaw’s ‘Puppet on a String’  sandwiched between the hymn tune ‘O God our help in ages past’  and the quick march ‘National Emblem’?

In its way the music here, some 52 years after it was recorded, is a marker of the musical demographic of the current brass band audience we attract.

So what will be different when we return to a new era of concert going ‘norms’ if we just keep placing ourselves in an aspic pickled bubble of music making that has changed little in perspective since this 1968 release?