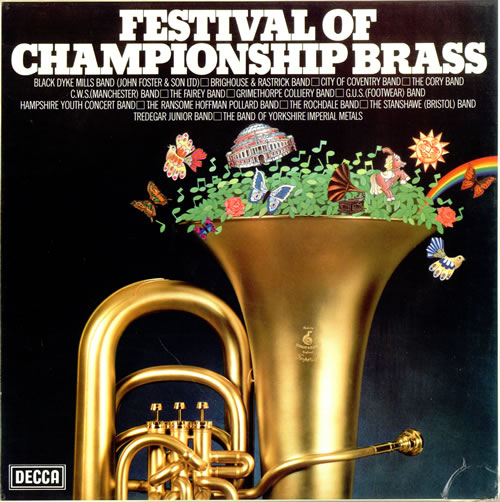 Box-set binging is nothing new.

Forget the joys of a weekend on the sofa eating popcorn and cold pizza with ‘Breaking Bad’, ‘24’ and ‘Game of Thrones’ to help send you into a catatonic state of twilight insomnia.  45 years ago any fan of Decca’s ‘Sounds of Brass’ series could do it with the help of this triple LP musical leviathan.

No less than ‘24’ different episode highlights in fact – complete with opening massed band ‘National Anthem’, all the way through to the impish emperor himself, Walter B Hargreaves, leading Stanshawe through a whiplash polka from ‘The Bartered Bride’.

In the mid-1970s there was still a healthy market for brass band recordings.

Listening tastes were eclectic to say the least, and you could pop into your local Woolies and pick up the latest release from Black Dyke Mills and still have money to spare for some Glam rock from Marc Bolan and a bit of ‘stride’ piano playing courtesy of Mrs Mills.

The ‘Sounds of Brass’ heyday was coming to an end though (the last came in 1980) as music cassettes quickly overtook LP sales thanks in part to the introduction of the Sony Walkman in 1979 - although they were soon superseded by the compact disc.

Brass band cassettes stayed round a little longer, but with ‘Blitz’ by Black Dyke in 1985 the writing was on the wall: The LP was doomed.

This then is a wonderful reminder of a very different box-set listening era; the brass band version of K-Tel’s ‘Super Hits of the 70’s – although Quentin Tarantino might not opt for Yorkshire Imps playing TJ Powell’s ‘The Tops’ as the backing track for a Bradford garage based reprise of ‘Reservoir Dogs’.

Still, it was well worth spending time listening to James Shepherd on ‘Cleopatra’  and Phillip McCann on ‘Alpine Echoes’  to James Scott leading Brighouse on Meindert Boekel’s ‘Scherzo’  and CWS (Manchester) under Alex Mortimer with ‘Night on the Bare Mountain’.

This then is a wonderful reminder of a very different box-set listening era; the brass band version of K-Tel’s ‘Super Hits of the 70’s – although Quentin Tarantino might not opt for Yorkshire Imps playing TJ Powell’s ‘The Tops’ as the backing track for a Bradford garage based reprise of ‘Reservoir Dogs’.

And there are the oddities you may never hear again such as ‘Casino Dances’  played by Ransome, Hoffmann Pollard and the theme from ‘Exodus’  by Hampshire Youth Concert.

However, you will surely return the needle on your record player back into position for an electrifying live performance of ‘Force of Destiny’  played Black Dyke at the 1972 National Championship Festival Concert.  It makes your blood bubble.

All that and Vaughan Morris, who provided the sleeve notes, was also something of a Delphic LP oracle about the rise of the box-set binge culture phenomenon in times of strife…

“In the difficult period ahead,” he wrote, “we shall need the soothing relaxation of music more urgently, perhaps, than at any time in our history. Brass bands might, thus, have a new and more splendid opportunity to render service to the communities in which they have their roots.”

It could have been written today.

November 17 • Chadderton Band is a non-contesting band playing at various events throughout the year. We are a friendly band looking for players of all ages and abilities on all sections + EUPH and percussion. Most welcome to come along and have a blow give us a try.

November 12 • Crewe Brass require an Eb or Bb Bass to complete the "engine room" line up. We are also seeking a Tuned Percussionist to complete our section.

November 1 • We are currently looking to recruit a Bass Trombone BBb bass and EEb bass to bring the band up to strength ready for when things return to normal. We are graded section 3 in the Midlands taking part in a good range of concerts and contests