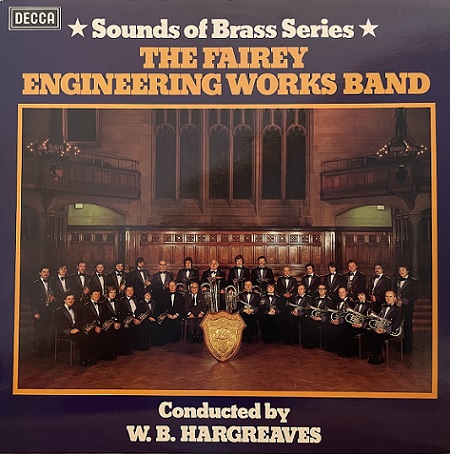 The 1970s were a curious contesting decade for the Fairey Band.

By 1976 Kenneth Dennison’s tenure as Musical Director had run out of steam and patience – a cultured man never quite at ease in front of the band as he had been as its celebrated trombone soloist.

The reality though was that a single victory at the 1973 Wills Championship Grand Finals was scant return for a band that still enjoyed considerable financial support from its sponsors.

They desperately needed a spark of inspiration.

The short interregnum of the flamboyant Richard Evans (and one appearance with George Thompson) never quite ignited things, so many in many ways the appointment of the 71-year-old Walter Hargreaves in 1978 was a curious one.

He was a noted martinet: small, rotund, tempestuous in nature yet iron willed in discipline, he had developed Stanshawe Band into an elite performer noted for their thrilling musical approach.

Stanshawe players later recalled in Arthur Taylor’s seminal book, ‘Labour & Love’ that he was that and more: “…he drove us on emotionally and musically” one said, whilst another observed; “Walter’s message was that you have to think first class all the time – even about little things.”

He was a noted martinet: small, rotund, tempestuous in nature yet iron willed in discipline; developing Stanshawe Band into an elite performer noted for their thrilling musical approach.

It was to prove to be a brilliantly phosphoric combination – highly reactive and occasionally unpredictable – (there were contest highs and lows) but just what Fairey had been missing. Over the next three years he brought six significant victories, crowned by a truly memorable success at the 1979 British Open on ‘Le Carnaval Romain’.

It could not last – neither party had the stamina to keep up the exhausting search for his form of musical perfection.  Fortunately, this wonderful LP release from 1980 captures a moment in time when it got as close as it gets.

Recorded at Whitworth Hall at the University of Manchester it is a band playing on a wave of inspired direction on music that Hargreaves revels in.

All the repertoire has an authentic stamp of deep-seated musical understanding sprinkled with the classiest covering of showmanship.

All the repertoire has an authentic stamp of deep-seated musical understanding sprinkled with the classiest covering of showmanship.

The opening ‘Hungarian March’  is rich with bluff bombast, the Bourgeois ‘Serenade’  dried to a crisp with stylish wit.  Barron’s ‘Cossack Ride & Slavonic Dance’  is an inspired piece of musical portmanteau.

And whilst the scope of the MDs particular brass banding genius can be found in the dichotomies of the passionate brush strokes of the ‘Bolero: Salamanca’  against the precision of the march ‘Arnhem’  and the imperial reserve of the ‘Heroic March’  from ‘Epic Symphony’, it is his command of the Berlioz overture that leaves you breathless in admiration.

The pacing, balance and colouring couldn’t be more evocative if you turned a blind corner in a Rome street to be faced head on with a Bacchanalian carnival procession itself.

Lyndon Baglin (his right-hand man within the band) is at the peak of his lyrical powers on the famous Cor Anglais solo, providing the launch pad for an express ride of lean, muscular vigour that has the raw excitement of the Palio di Siena horse race.

It is as close to the perfection both Berlioz would have hoped for and Hargreaves so brilliantly demanded.