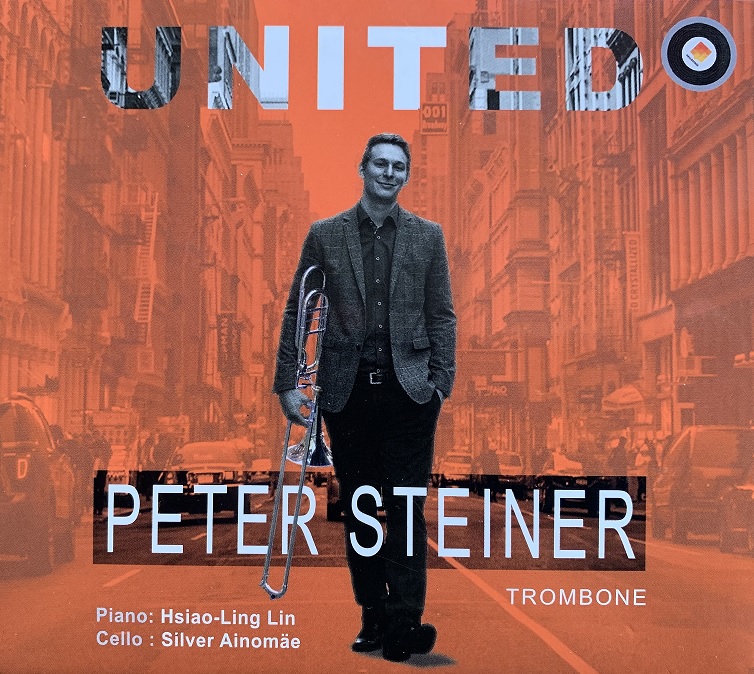 Having been taught by the likes of Joseph Alessi, Warren Deck, Dany Bonvin and Lito Fontana, little wonder Italian trombonist Peter Steiner is such a glorious player to listen to.

And having a musical hinterland that encompasses time spent at the famous Music Conservatory in Bolzano, the Mozarteum of Salzburg and the Juilliard School in New York, as well as a CV that features tenures at the Vienna State Opera, Vienna Philharmonic and Colorado Symphony Orchestra - all by the time he was 23, you can also hear why.

Given the trans-Atlantic ethos of this 2017 release, he wears his musicality like a stars and stripes suit tailored by Dolce & Gabbana; bold statement playing articulated with refined elegance.

His technique is startling, as is his chameleon-like ability to shift effortlessly in style and tonality - from the lithe, sinuous mystery of Debussy’s ‘Syrinx’ to the sweaty sensuality of Piazzolla’s ‘Oblivion’. The marked characteristics of Todd Goodman’s ‘Trombone Concerto’, from excoriating forcefulness to the tenderest stroked nuance, is a remarkable display of musical dichotomy.

So too the treatment of Puccini’s aria, ‘E lucevan le stelle’ from ‘Tosca’; which sees the subtle balances between the accompanying cello and piano allow the solo line to retain the centre of its sombre ‘spinto’ focus (this is a forlorn man waiting for the firing squad), whilst the Bozza ‘Hommage a Bach’ is decisive, methodical and imposing.

His technique is startling, as is his chameleon-like ability to shift effortlessly in style and tonality - from the lithe, sinuous mystery of Debussy’s ‘Syrinx’ to the sweaty sensuality of Piazzolla’s ‘Oblivion’.

The series of dreamlike sequences of Ricardo Molla Albero’s ‘La Citta dei Sogni’ pay homage to the talents of Italian composer Nino Rota - in turn beautifully melancholic, schizoid dramatic and hauntingly terrifying.  It hangs like a portrait of the sub-conscious next to Jacques Casterede’s ‘Sonatine’; a rebus of complexities, meter changes, overlapping melodic lines and oblique ciphers of intent.

The hour of stunning playing (aided by the superb accompaniment of Hsiao-Ling Lin and Silver Ainomae) comes to an end with the oily sultriness of ‘Libertango’ played in a manner that takes you to the musty back street bars of Buenos Aries in a blink of an eye.