There was a busy day of contesting at Preston's famous Guild Hall on the weekend — led by a double victory for Mark Peacock with Hepworth and Longridge.

With the various Regional Championships just a few weeks away, there was a great opportunity for competitors to flex their early season contesting muscles at the Brass at the Guild event in Preston.

And although the adjudicators certainly emphasized the 'work in progress' aspects of performances in each of the senior sections, they also praised bands for taking the opportunity to use the contest as a helpful indicator of where they stood on the qualification road to Cheltenham and London.

One man who had a musical sat-nav for Christmas was Mark Peacock, as he led Hepworth (above) and Longridge to a Championship/First Section 'double'. A brace of well structured performances of 'Cambridge Variations' and 'Essay' enabled his bands to pocket the £400 first prizes and look ahead to the more immediate destinations of Bradford and Blackpool with confidence.

"Brass at the Guild is the perfect early season contest,"he rather understandably said to 4BR after talking to adjudicators David Thornton and Sandy Smith.

"We know we have a great deal of work to do on two very difficult pieces, but the contest gives us the chance to keep building — and the judge's remarks will give us further aspects to polish up on.

Both bands are hard working and determined to do well — and these results will really help push us towards the Areas."

Not surprisingly all seven top section rivals opted for 'Cambridge Variations' as they tested their early season progress before the battles in Bradford, Blackpool and Bedworth.

With Hepworth showing substantial glimpses of high-class competitive form ahead of St Georges Hall, Thoresby Colliery and Wingates also left Preston informed of the specific areas of 'qualification' work needed to be addressed with their solid renditions, whilst the remainder departed knowing hard-yakka was required before visions of the Albert Hall appear on the horizon.

Adjudicator David Thornton was both candid and constructive in his remarks — touching on aspects of balance, dynamic, rhythmic and transition discipline, whilst also praising the main soloists, and principal cornets in particular, for their efforts.

Two bands that also left boosted by taking a step closer to another major championship appearance were City of Bradford and Leicestershire Co-op, who claimed places at the British Open Spring Festival — the latter on the judge's recommendation.

There is likely to be a keen battle for First Section qualification at Blackpool in a few weeks time, after Longridge drew first blood against podium finishing rivals Haslingden & Helmshore and Pemberton Old Wigan DW on the deceptive Area set-test, 'Essay'.

All seven bands opted for Gregson's work of musical nuance and technical transparency — one that showed it will be a stern test of contesting nerves and character over the coming months. Poulton-le-Fylde made it a North West top four as they pipped welcome visitors from the North East and Yorkshire.

Adjudicator Sandy Smith also gave perceptive remarks — noting areas that he felt all bands needed to address in terms of intonation, rhythmic consistency and tonal warmth if they were to write a qualification grade 'Essay' over the coming two months.

There was a great victory for Frickley South Elmsall in the Second Section, as the Yorkshire band gave a well-worked account of Area set-work, 'The Mermaid of Zennor', under debutant conductor Kyle Blake — notching their first major contest success for well over a decade against rivals from four different regions.

There were celebrations to be heard as the joyous players raced to the bar to congratulate their young MD and euphonium player Ian White who took the 'Best Soloist' award.

Once again adjudicator Kevin Wadsworth delivered his remarks on 'what he heard' as he said — although he added that his written remarks contained constructive indicators of what bands playing Philip Harper's set-work may need to address to impress in the various 'Area' boxes.

Although Pemberton Old DW B gave a solid 'Fire in the Blood' to come second ahead of welcome Scottish visitors Dunaskin Doon, who also opted for Philip Harper's colourful fishy tale, Kevin's remarks held resonance for all competitors — specifically addressing the need for not always relying on 'crash, bang effects' or safe 'middle of the road' dynamics to try and gain reward.

Adjudicator John Doyle once again enhanced his reputation for humorous straight talking in the Third Section as he pinpointed plenty of areas the eight competitors could build on over coming weeks.

With only one band taking the 'Butlins option', John had ample opportunity to compare and contrast progress on 'A Cambrian Suite' — admitting it was a tough ask.

Understandably he also emphasised the need to capture the right 'mature' musical approach for Michael Ball's work to be successful — one certainly borne out by winners Farnworth & Walkden directed by Matt Shaw, as well as their soprano paying 'Best Soloist' winner, John Brookes.

'Clips and slips' were less of a concern at the present time he added, although he did note that come the Areas these would also have to be minimized if a trip to Cheltenham was to be gained.

That may have accounted for the title winning chances of the confident podium finishers Blackpool Brass and Stacksteads, with both stylistic and technical vagaries marring the bands that came behind them.

In a lovely touch from the organisers, Evan and Linda Maudsley were presented with an award for notching up 50 years of service together to the banding movement in the North West area.

John also hoped that he had 'not offended anybody' with his remarks in the Fourth Section, as his summing up ensured nobody was left in any doubt what work need to produce qualification level performance at the Areas in a few weeks time.

Bandroom libraries may well be scoured for Strauss waltzes as he pinpointed that particular stylistic failure in Peter Graham's 'The Journal of Phileas Fogg' — played by all the bands.

However, there was also much to enjoy in all nine performances — with some excellent individual playing on show from top to bottom, even if the overall standard of ensemble playing was understandably a little inconsistent with nearly five weeks or more to go before the Area contests get underway.

There was delight for BMP Goodshaw as they look to bounce straight back following their relegation to the Fourth Section, as young MD Joshua Hughes led them to the £400 first prize on his contesting debut with the band.

Tarleton Brass had to be content with the runner-up spot for the second year in a row, whilst the final podium slot went to a thrilled Brindle.

A delighted Chris Jeans headed back down the M6 with Youth Brass 2000 having claimed their fourth consecutive British Open Youth title. In a reprise primarily of their recent Butlins winning programme, the polished musical presentation was accompanied by some terrific playing.

With the excellent helpers of Lancashire Contest ensuring a free- flowing day of entertainment ended bang on time, and with the welcome sponsorship from R. Banks & Son (Funerals) Ltd enabling the event to offer substantial prize funds and numerous awards, Brass at the Guild showed that it has again captured the imagination and support of local competitors as well as those from as far afield as Scotland and Wales.

Not surprisingly all seven top section rivals opted for 'Cambridge Variations' as they tested their early season progress before the battles in Bradford, Blackpool and Bedworth4BR 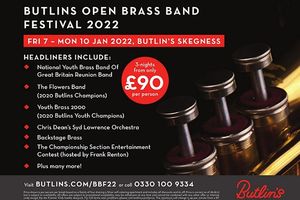 Entertainment and safety on offer at Butlin's

December 7 • The Butlin's Open Brass Band Festival is offering plenty of entertainment in a Covid-19 safe environment to back the competition action in January. 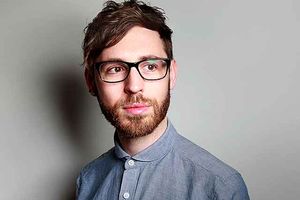 December 7 • The music of award winning composer Gavin Higgins will be featured this week in performance at the RNCM in Manchester. 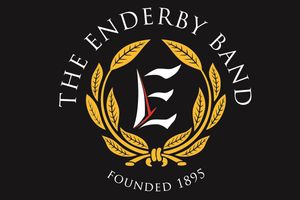 December 7 • The Enderby Band has welcomed two new signings ahead of the 2022 season.