A concert celebrating the musical career of David Read MBE has raised over £1,000 for his chosen charity.

A charity concert celebrating the musical career of David Read MBE has raised well over £1,000 for 'The Friends of Hinchingbrooke Hospital' near Huntingdon.

Hosted by East London Brass under conductor Jayne Murrill at the Church of St Mary the Virgin in the historic village of Godmanchester in Cambridgeshire, it featured a programme of works that had great significance to David in his playing, teaching and conducting career.

Friends, family, former pupils and players enjoyed a thoroughly entertaining afternoon — especially as David was also able to talk about the pieces — ones that ranged from Gilbert Vinter's 'James Cook — Circumnavigator' to 'The Gold and Silver Waltz', 'Sunset Rhapsody' and 'Variations for Brass Band', 'Oklahoma!' and 'The Medallion' march.

David also talked about some of the iconic figures he played with and met, whilst he also showed that he has not lost any of his cornet playing skills (ones that had made him Champion Soloist of Great Britain) as he joined East London Brass principal cornet Rob Horrocks and his former City of Cambridge Band principal cornet Andy Callard for a rousing rendition of 'Bugler's Holiday'.

"I'm very grateful for everyone who came to the concert and to the thousands (over 5,700 people have now viewed it) who have since enjoyed the concert on-line through the Facebook page of East London Brass,"he said.

"It was a wonderful afternoon and I'm particularly thrilled by the generosity shown in supporting a wonderful organisation."

David received messages from well wishers, contest organisers and fellow judges from all corners of the banding world, as well as from many conductors who have been the recipients of prize winning adjudications over the years — including Prof Nicholas Childs of Black Dyke who sent a personal video message of congratulations.

Speaking about the event, Martin Dawe of East London Brass told 4BR; "We were honoured to be able to put on this concert — although David ensured that he picked a programme that tested us to the full — with three major test-pieces!

It was wonderful day and thanks to the work of James Parkinson and his colleagues it has been recorded for everyone to enjoy."

To enjoy the concert yourself go to: https://www.facebook.com/EastLondonBrass/ 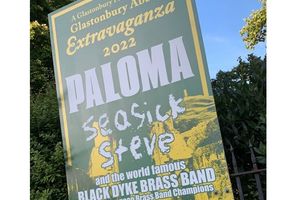 August 14 • Black Dyke Band has been adding to its every growing fan base after its latest appearance at the Glastonbury Abbey Extravaganza. British Open to be live-streamed

August 14 • You can sit back anywhere in the world to enjoy the bands performing at this year's British Open as the Wobplay recording platform confirms streaming coverage. 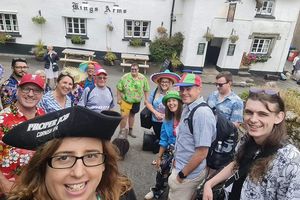 August 14 • Five bands had a great time entertaining audiences on their pub tour in Devon.