There was plenty of great entertainment on show at the Bolsover Festival of Brass with Skelmanthorpe leading the way alongside Crofton Silver, Chapeltown Silver, Whitworth Vale & Healey and Matlock.

A worldwide audience of brass band fans from as far afield as Australia and Singapore, the USA, Europe and in all regions of the UK enjoyed over 13 hours of non-stop brass band entertainment broadcast live from the Bolsover Festival of Brass.

The interactive approach from the contest organisers backed by event sponsors Warwick Music Group also enabled them to vote for their 'Viewers Award' winners in the Championship and First Section — an initiative that proved extremely popular, especially with fans of Skelmanthorpe and Crofton Silver Bands.

In addition there were a host of supportive comments written on the live broadcast Facebook page for bands in each section whose programmes were beamed across the globe — and which included repertoire as diverse as the heavy rock group Iron Maiden (complete with electric guitar soloist) and 1960's Eurovision Song Contest winner Sandy Shaw, to Shostakovich and Mussorgsky.

There was also plenty of great visual entertainment, with Second World War themes and outfits from Oddfellows Brass to the brilliantly demonic approach of John Davis dressed as Darth Maul with Unite the Union.

The Championship Section contest proved to be an enjoyable battle as 15 rivals pitted their entertainment wits against each other in the hope of catching the fancy of adjudicator Alan Morrison.

In the end it was Skelmanthorpe led by Martin Heartfield that claimed a comprehensive victory. Their neatly contrasted programme, played with confident panache secured the £750 first prize, as well as the 'Viewers Award' and 'Most Entertaining Performance' accolade.

Opening with Matthew Hall's 'Activate' and 'Legends of Cyfarthfa', the Yorkshire band featured their outstanding tenor horn soloist, Laura Brown, who completed the haul of silverware by winning the 'Best Soloist' prize for a wonderful rendition of the Hoagy Carmichael classic, 'Stardust'.

'Romany Fire Dance' and the finale from 'To Boldly Go' by Peter Graham rounded off a set that was described by Alan Morrison as, "A joy to listen to", with the soloist's contribution being "a real highlight of the day".

He later backed up his written remarks be telling the audience that the winner had been, "really outstanding"in a contest where "consistency was required from beginning to the end"from performances if they were to be successful.

Conductor Martin Heartfield was clearly delighted as he clutched the Major Peter Parkes Trophy as the winning conductor, telling 4BR. "This is a great contest that gave us the chance to showcase what we could do to the world. The players did everything and more for me, so this has been a deserved win."

Trailing behind them came an inventive 'Latin Brass' programme from Derwent Brass that included both original works and classy arrangements by MD, Jack Capstaff, whilst third place went to Roberts Bakery led by Paul Lovatt-Cooper, with a set rounded off with his own evocative composition 'The Final Voyage'.

Ratby Co-operative was fourth with a delighted Boarshurst Silver in fifth — enabling them to claim the qualification place on offer for an invitation to compete at the Senior Trophy in Blackpool in May. The top-six places were completed by Welsh debutant Llwydcoed.

Earlier in the day the action started in the main hall at 9.00am with a keenly fought First Section event.

At its conclusion it was the busy Crofton Silver (who also played in the top section) who claimed the £500 first prize under MD Dean Jones, with a space-themed set entitled 'Ad Astra' (To the Stars), which cleverly linked a narrative thread that saw them blast off with 'Into the Stars' by Ben Hollings and return to earth with 'Starburst' by Dan Price.

In between their featured soloist Matthew Reasbeck delivered a virtuoso rendition of the third movement of the 'Stratos' Euphonium Concerto, which was balanced by the lyrical control of 'Lake of Tenderness' and the funky drive of Rebecca Lundberg's 'Conspiracy'.

It enabled the Yorkshire band, who will be promoted to the Championship Section in 2020, to claim a single point victory (as well as the prizes for 'Most Entertaining Performance' and Warwick Music Group 'Viewer's Award') over Midland rivals Enderby, whose contrasting set under Ryan Richards very nearly saw them successfully defend their title despite incurring a time penalty deduction.

In a contest where the "standard was really high", making for "a difficult decision"according to adjudicator Steve Pritchard-Jones, the remaining top-six places went to Longridge's space-themed set ahead of the Latin-American flavours of Milton Keynes Brass and a more traditional set from Hebden Bridge.

The action at the Heritage High School venue was spread over two halls throughout the day, with the Second, Third and Fourth Section bands also providing wonderful entertainment for a supportive audience in the sports hall as well as for those relaxing at home across the globe.

The ambitious Chapeltown Silver claimed a clear cut-victory in the Second Section (straight after performing the same set in the Championship Section) as they took the £400 first prize under Sam Fisher.

They opened with 'Starburst' by Dan Price, followed by a super rendition of 'Londonderry Air' by trombone soloist Helen Irvine. The 1960's sound of The Beatles and 'Eleanor Rigby' contrasted with 'Remembrance' by Ben Hollings before they rounded things off with the asymmetrical rhythms of 'Balkan Dance' by Etienne Crausaz.

The remaining to-six places in a highly enjoyable battle for adjudicator Sheona White went to Audley Brass (with their version of Iron Maiden's 'Run to the Hills' to open), Rockingham and Old Hall Brass. Audley's talented soprano player Craig Shaw took the 'Best Soloist' award with a classy rendition of 'Solitaire'.

There was also great entertainment on show in the Third Section as Whitworth Vale & Healey carried on their fine 2019 form by taking the honours and £300 first prize under MD Chris Binns.

They opened with a fizzing 'Malaquena' before the warmth of 'La Basilica di San Marco' segued into a wonderful account of 'Czardas', played by former Fairey euph star Ian Peter on Eb tuba to deservedly take the 'Best Soloist' award. They closed with the showy virtuosity of Philip Sparke's colourful 'Klezma Karnival'.

Audley Brass took the runner-up spot thanks to that heavy metal approach, but which also saw them contrast things with the curious, but understandable link between 'The Wonderous Cross' and the need to protect themselves against the dark forces of their finale of 'Nosferatu' by Mario Burki!

A solid, well directed performance from Rockingham under Adam Whittle took the final podium slot, with the remaining top-six places in a cracking contest going to solid sets from Golborne, Deepcar and Hoover Bolton.

Although there were only five competitors in the Fourth Section, they certainly provided excellent early morning entertainment, with the honours and £250 first prize going to the Matlock Band conducted by Chris Banks.

They also reached for the stars with a set that opened with 'Horizons' by Paul Lovatt-Cooper before moving into the cornet solo 'Stars' played stylishly by Karen Birkett. They followed with the popular 'Lake of Tenderness' by Ben Hollings before rounding things off with the fizz of Alan Fernie's 'Rocket'.

With the continued support of local councils backed by event sponsors such as Warwick Music Group, the Bolsover Festival of Brass continues to make its mark on the banding world.

Plaudits for the inventive broadcast initiative led by James Parkinson and his team were well deserved, with a spokesperson for the contest telling 4BR that they had received numerous messages of congratulations from across the banding world.

'Romany Fire Dance' and the finale from 'To Boldly Go' by Peter Graham rounded off a set that was described by Alan Morrison as, "A joy to listen to", with the soloist's contribution being "a real highlight of the day"4BR 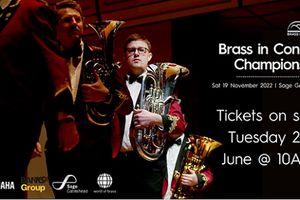