The last in the present series tonight sees a special broadcast from the home of Cory Band with their MD Philip Harper to find out just how he makes the world's number 1 band tick.

There is a special 25th edition of Besson 'Fridays at Home' tonight (6.00pm) as the team go on the road for a programme all about the world's number 1 ranked band Cory and their inspirational MD, Philip Harper.

Regular presenters Steven Mead and Roger Webster are joined by 4BR Editor Iwan Fox and guests to find out more about the legendary band and the conductor who makes them tick.

There is an extended interview with Philip to find out more about his musical journey from a darkened cinema in Essex in 1977 hearing the first notes of the Star Wars film hitting his eardrums courtesy of a certain Maurice Murphy, to Bristol and eventually (via Japan) to his musical home in Ton Pentre in the Rhondda Valleys — and Cory.

It's a fascinating story — from horn player to conductor, via teaching and tenures at the likes of Thornbury, Flowers and Tongwynlais — great highs and even the occasional low.

All this and Roger and Steve pose a few questions of their own as well as from fans across the banding world, and there is the chance to hear the band in action from the European, British Open and Brass in Concert Championships.

Go to: All this and more in this week's Episode 25 of Besson Fridays at Home 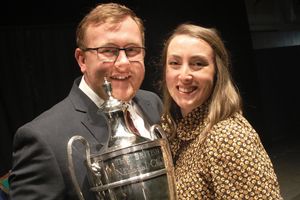