A unique brass band achievement was marked by some classic Yorkshire culinary delights for a select group of Black Dyke Mills Band players and their legendary MD.

A little piece of brass band social history been sent to 4BR.

It belonged to George Morgan, who for a decade from 1974 was the solo Eb tuba player of Black Dyke Mills Band.

It comprises a set of five celebratory dinner menus, marking either a National or European title success from the years 1975/76/77 and 1979.

This was the period when under the baton of Major Peter Parkes, Black Dyke became only the third band in history to win four National titles in a row.

The menus came to light in a box of personal memorabilia sent to 4BR by Cate Rhoades a pupil of his, following George's death. They were given to her by George's widow Iris to ensure that the contents be sent to people that would be able to use them for research purposes.

It also included numerous other items which have now been catalogued and sent to both Black Dyke and Brighouse & Rastrick (where George also played and won National and World titles) as well as brass band historians for safe keeping and research purposes.

Foden's Band had claimed an unprecedented 'double hat-trick' between 1932 and 1938.

However, on the occasion when Black Dyke was 'barred' in 1978 they returned to the Royal Albert Hall and uniquely added a European Championship success.

It is an achievement that has never been repeated.

John Foster & Son Ltd was certainly proud of its band, and after each National victory honoured the players with an expensive dinner at a local hotel and restaurant in Bradford.

There, the Chairman of the Board would propose a toast to 'Her Majesty' and then to 'The Band', whilst Major Parkes would reply on behalf of his players.

Each also listed previous Belle Vue and National wins (with an added European entry for 1978), just to remind everyone of the Queensbury's band history of success going back to 1855.

How many players performed in all five victories is currently not known, but they would include Philip McCann, John Clough, David Pogson, Kevin Wadsworth, Frank Berry, Derek Jackson, John Slinger, Jack Brooke and George Morgan.

How many of them kept their menus (signed by Major Parkes) though is another matter — but George Morgan did — as well as ticket stubs and airline tickets (to Japan and Switzerland) concert and contest programmes (including the 1974 British Open signed by all the Black Dyke players), press cuttings and even photocopies of the adjudicator remarks for the band.

Speaking to 4BR Cate said: "I'm so pleased George's treasures are being kept and will be used to help the band's he played for celebrate their achievements. He was very proud of his associations with them and would be delighted to know they are being kept safe." 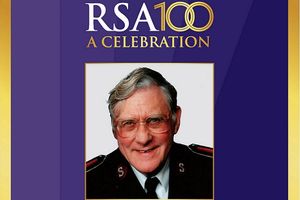