Paris Brass Band enjoyed their trip to Amboise in the Loire Valley as they claimed the French Open Championship title in commanding fashion.

It was the band's first title success under MD, Laurent Douvre as they returned to the contest for the first time since winning in 2012. They will now look towards their appearance at the British Open Championship in Birmingham in September.

The band also completed a memorable visit by winning the separate march contest and giving a fine Gala Concert performance before the announcement of the results.

A delighted MD, Laurent Douvre said on his Instagram page: "I am very happy. It is a great us to win the first prize in the Championship Section with 119 points from 120 and to win the march competition as well and for Amelie to win the 'Best Soloist' prize.

Our congratulations also go to Exo Brass and to the organisers who allowed us to perform a wonderful Gala Concert."

Runner-up was Brass Band Exo Brass (Mathias Charton) who opened their set with 'Ride' by Samuel Hazo, followed by 'The Green Hill' played by their euphonium soloist, and the set-work.

The Dutch band, returning to the event for the first time since winning the Second Division title in 2016, opened with 'Fanfare & Celebration' by Philip Sparke before their soloist gave a superb rendition of the finale from the 'Concerto for Marimba'.

They closed with a finely delivered account of the set-work, 'The Land of the Long White Cloud'.

Their French counterparts also played with considerable style with the set-work followed by the baritone solo 'The Holy Well' and Tom Davoren's 'Legacy'.

Formed in 2015, they competed at the event in 2019 and at the French National Championships the following year. They claimed the title by providing solid performances of the set-work, 'Napoleon on the Alps', the soprano solo 'Flowerdale' played by Fabrice Allain and Philip Sparke's 'Music for a Festival'.

On their Facebook page they said; "Congratulations to all musicians, and especially to our super chef Mathias Charton for leading us to this title!"

London City Brass claimed the Fourth Division honours and said that they had enjoyed their "amazing weekend away in Amboise — visiting chateaux, drinking wine, eating crepes and winning the 4th Section!"

The band usually rehearse in the heart of the City of London once a week and is made up of players from various backgrounds and experience. They competed at the event in 2018 and 2019, gaining podium finishes, but on this occasion returned home with the title and honours. Brass Band Ocean (Pascal Piedefer) was runner-up.

Under the baton of Andrew Brittin wearing what looked like a shirt bedecked in English red roses, they opened with a fine account of the set-work 'Saint-Saens Variations' by Philip Sparke, followed by the baritone solo 'Nessun Dorma' and James Curnow's 'Appalachian Folk Song Suite'.

It was the band's first title success under MD, Laurent Douvre as they returned to the contest for the first time since winning in 20124BR 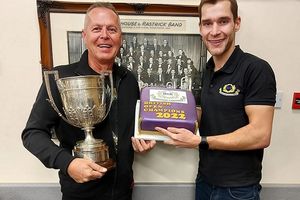