Results for the 2009 Yorkshire Regional Championships from St George's Hall, Bradford on Saturday 7 and Sunday 8 March.

In one of the most intriguing top section contests at Bradford for many years, their trademark performance of solid musical values found favour with Steven Sykes and Nigel Boddice in the box, and sent the band to the Royal Albert Hall for the second consecutive year.

They described the winners as providing ‘…a simply outstanding performance’ of the set work, ‘Salute to Youth’.

On an evening when the old order of Yorkshire banding was somewhat shaken to its core, it was Hepworth (Cookson Homes) who took the priceless second qualification place with a rendition under Ian Porthouse that found favour with many in the hall.

Missing out was two of the traditional heavyweights, Grimethorpe Colliery in 3rd and Brighouse & Rastrick who came 5th.

Both will have known that they had left the qualification door open for their rivals to leap through after providing thrilling, if somewhat error strewn renditions.

They described the winners as providing '…a simply outstanding performance' of the set work, 'Salute to Youth'4BR

The major intake of breath however came with the announcement of Black Dyke in 4th place (although both they and Carlton Main had already re qualified for the Finals).

Off the number 1 draw, they had produced brilliant, if very individual rendition under Nicholas Childs, that reminded many who were in Blackpool last weekend of the exciting and colourful rendition of Leyland. The result was almost as surprising.

Sunday was also a brilliant day for the Roberts family, and with mum in the audience to support her sons, John steered Skelmanthorpe into 6th place.

David has now steered Rothwell to Yorkshire Championship success in the Championship, First (1998), Second (1996) and Third Sections (1994, 1995) in his tenure with the band, completing a remarkable ‘Full House’ of family victories at all levels of the contest. David’s father, Gordon, led Rothwell to success in the Fourth Section back in 1968, whilst John led the band to Second Section victory in 1988.

Outside the top six came Carlton Main in 7th, Marsden in 8th, Powerfuel Hatfield in 9th and Stannington in 10th.

Although not yet confirmed the equally intriguing battle to avoid relegation will see Yorkshire Imps and Hammonds Saltaire looking anxiously at the grading tables after they ended up in the final two places in the 12 band field.

There was denying the delight of Rothwell however and one of the most under rated bands in British banding, proved once gain the folly of under estimating their musical abilities before a note had been blown.

The gentle ribbing of the 4BR Editor, who once again was guilty of failing to spot their winning potential after their on stage performance, was good humoured and thoroughly deserved too!

Rothwell had confounded their critics but delighted their huge band of loyal supporters once again.

Earlier in the day there has been a victory in the Second Section for Holme Silver directed by Duncan Beckley. It proved to be a repeat victory for the combination exactly a decade after they had won here in 1999.

Joining Holme at Harrogate will be Frickley/South Elmsall, who secured their first trip to the Finals since 1998.

Sunday kicked off with 9 Yorkshire bands finding ‘The Talisman’ to be a fearsome test of character in the Fourth Section.

In the end it was Maltby Miners who set the unbeatable maker off the number 1 draw to secure victory, whilst joining them at Harrogate will be Thurcroft Welfare.

Even if the bands did find the piece hard graft, they would have enjoyed the entertainment provided by the composers in his delightful, if somewhat puzzling address to the St George’s Hall audience prior to the announcement of the results!

On Saturday it was the turn of the bands in the First and Third Section to provide the contesting entertainment.

Garforth once again showed just how far they have come in such a short space of time by taking their first Area title under the direction of Steven Bailey. Since making their first appearance here in 2005, the band has never finished lower than 6th and has now secured yet another trip to Harrogate and a further promotion. They will joined at Harrogate by Crofton Silver.

In the First Section, ‘Pentacle’ once again proved a difficult test for the bands, but it was a substantive musical performance from Norman Law and Wakefield Metropolitan that took the honours ahead of Hade Edge.

Full retrospectives of each of the contest will appear on 4BR by Tuesday evening.

Additional comments and thoughts from Bradford can be seen on our twitter site:

Black Dyke and Carlton Main Frickley Colliery have pre-qualified for the Finals so there are two additional places up for grabs. Joining them will be Rothwell and Hepworth. 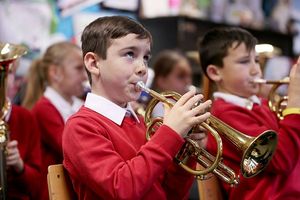