Glorious weather, a packed hall and plenty of great music was on offer as Sandhurst Silver under Ian McElligott led the prize winners in Weston.

There was an excellent day of brass band contesting in Weston Super Mare on the weekend, with bands from the West of England, London, Midlands and Wales making the trip to seaside to perform in the town’s Winter Gardens.

Thanks to the glorious weather and slick organisation from John Woods and Brian Elliott of SWBBA and stewarding support from members of Weston Brass, the hall was packed with listeners throughout the day.

Adjudicators David Thornton and Chris Wormald also enjoyed a wide selection of own choice repertoire too.

In the joint Championship/First Section, Sandhurst Silver conducted by Ian McElligott (above) took the Town Mayor’s Cup and the £200 first prize back up the M4 motorway thanks to a fine performance of ‘Tallis Variations’.

Third place went to Lympstone SW Telecoms with their performance of ‘Journey into Freedom’.

There was real West of England battle in the Second Section, where Cornish challengers St Keverne directed by Gareth Churcher claimed the Bailey Trophy and £150 first prize with a reprise of the recent Area set work, ‘The Plantagenets’.

Paul Villers was presented with the Fred Trego Memorial Trophy as ‘Best Euphonium’ after catching the ear of adjudicator David Thornton.

Welsh challengers Pontypool Brass rounded off a busy contest weekend by crossing the Severn Bridge to claim victory in the Third Section under the baton of horn star Owen Farr.

They put behind them the disappointment of coming out of the prizes at the Ebbw Vale contest 24 hours earlier by giving a commanding reprise of ‘Land of the Long White Cloud’ to claim the Sun Life Stanshawe Award and the £100 first prize.

The Fourth Section contest played out to recent Area form with South Molton under the direction of Gil Taylor claiming the Weston Super Mare Trophy and £100 first prize thanks to their well delivered reprise of ‘A Devon Fantasy’.

The prizes were presented by Susan Oldfield, Secretary-elect for the Council of West of England Brass Band Associations and Alan McMurray Chairman of North Somerset Council.

Thanks to the glorious weather and slick organisation from John Woods and Brian Elliott of SWBBA and stewarding support from members of Weston Brass, the hall was packed with listeners throughout the day4BR 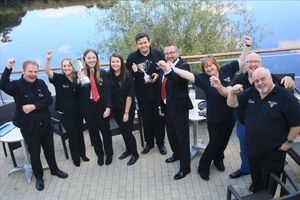